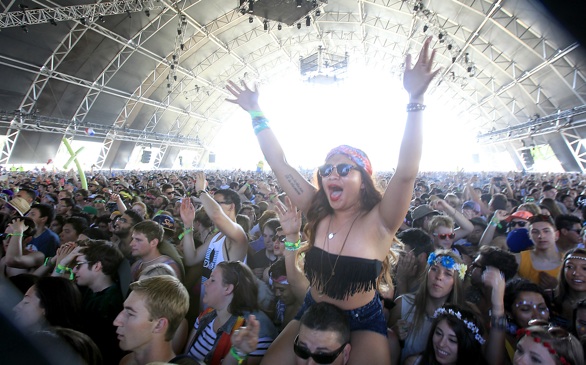 People across the U.S., and especially in Southern California, know this year's Coachella lineup was announced Wednesday night. Ecstatic festival-goers took to Twitter, Facebook, Instagram, etc. showing their uncontainable excitement with numerous emojis, photos and "reposts" -- and they have good reason to be so darn happy.

This year's festival is taking place over the course of two weekends again: April 11-13 and April 18-20.

And the list of performers is probably the best lineup we've seen in a while!

Here are the top five musical artists I can't wait to see:

5. Ellie Goulding
When: Friday, April 11 & 18
Why: The girl is known to be a firecracker during a live show. I bet "Anything Could Happen" and "Lights" performed on stage is nothing less than extraordinary. And how awesome would it be if Calvin Harris came out during "I Need Your Love" or vice versa?!

4. Pharrell Williams
When: Saturday, April 12 & 19
Why: One, I want to see this man who never ages in person (he's 40 years old!). Two, maybe he'll gives us a sneak of some of the collab projects he's got coming up this year, including work with Mac Miller and T.I. Who knows? Maybe, we'll get a surprise guest. And more importantly, Williams is working on a solo record, and I'm itchin' to see what he has in store.

3. Skrillex
When: Saturday, April 12 & 19
Why: Admittedly, I'm not a huge EDM fan, but I can get down with Skrillex. There's something about his music that's unlike other electronic sounds. Basically, his beats don't give me piercing headaches. When "First of the Year" or "Scary Monsters and Nice Sprites" comes on, I find myself transported back to my college years, dancing on top of tables at a frat party...and I love it!

2. Outkast:
When: Friday, April 11 & 18
Why: Last week I was jammin' to "Hey Ya!," and I thought, "What the hell happened to these guys?" I was pretty ecstatic to hear Big Boi and Andre 3000 were reuniting to perform two nights at Coachella! There probably won't be any new music, but that's fine with me - classics such as "Ms. Jackson," "Roses" and "So Fresh, So Clean" will satisfy my Outkast cravings.

Other Honorable Mentions You Probably Don't Know that Much About:

ZZ Ward - Looking at her, you don't expect blues-y, soulful lyrics, but that's exactly what you get with ZZ Ward. She's a pleasant surprise.
When: Friday, April 11 & 18

Capital Cities - This is not your typical EDM duo. Ryan Merchant and Sebu Simonian also infuse pop, rock and dance-oriented elements into their work. You must see for yourself what a Capital Cities live show is like.
When: Saturday, April 12 & 19

Krewella - Two sisters (no, they're not twins) plus one dude form unstoppable duo, Krewella. Jahan and Yasmine Yousaf and Kris "Rain Man" Trindl released their Get Wet album in September 2013, and their live shows hold true to the album title; you will get wet when you see them perform (take that however you'd like).
When: Sunday, April 13 & 20