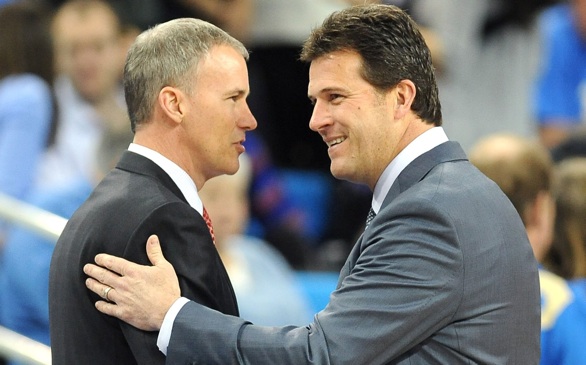 New USC coach Andy Enfield is quickly finding out he is not in the Atlantic Sun Conference anymore. The Trojans performed dreadfully for the second time in five days in a 79-60 loss to Arizona State on Thursday night at the Galen Center before 3,623.

The Trojans are 0-2 in the Pacific-12 Conference with no relief in sight as No. 1-ranked Arizona comes to the Galen Center on Sunday night. Barring a huge upset, the Trojans will play at No. 15-ranked Colorado on Jan. 18 with a chance to go 0-4.

This is not quite like an Atlantic Sun game against Stetson or Lipscomb. Or even Kennesaw State. And no one is thinking of calling USC “Dunk City” right now.

“They kept playing and we kept missing shots,” Enfield said. “We just didn’t make anything. We are a streaky shooting team, to be honest. I’m not going to sugar-coat it.”

Enfield built his early reputation as a shot coach and it’s obvious the Trojans need help in that department. USC shot 36 from the field, 18 percent on 3-pointers and 52 percent on free throws. Otherwise, the offense was fine.

“This is part of a long season,” Enfield said.

It figures to get a lot longer in the Pac-12, where six teams have three losses or less. USC’s first five Pac-12 opponents entered Thursday’s games with a 64-9 record. That’s why the Trojans are suddenly on an 0-2 start.

“We’re trying to stay positive with this group,” Enfield said. “It is frustrating when you play hard (and don’t get rewarded).”

Perhaps fitting of the opening 20 minutes, point guard Pe’Shon Howard stole the ball in the closing seconds and, apparently unaware of the time, dribbled away from the basket and attempted to shoot after time expired.

The only Trojan in double figures was guard Byron Wesley with 20 points and 14 rebounds. That was offset by Arizona State center Jordan Bachynski (20 points) and point guard Jahii Carson (18). The Sun Devils (13-3, 2-1) never trailed by less than 10 points in the second half.

“We all need to pick it up and start playing better,” Wesley said. “It’s just tough losing.”

Wesley said USC’s enjoyed solid practices during the past two weeks despite lopsided losses to UCLA and Arizona State.

“The crazy thing is I felt we practiced the best we have all season,” Wesley said. “We came out (against Arizona State) the first 5-10 minutes (but slacked off). It is what it is.”

USC point guard Pe’Shon Howard, who took only four shots in the previous two games, took 13 shots but made only three. Howard’s been absent offensively since hitting a 3-pointer at the buzzer to defeat Dayton. ... Center Omar Oraby appeared frustrated with the officiating for the second straight game. He spent part of a timeout talking to a referee and finished with just three points in 22 minutes. Enfield said Oraby’s been unhappy that he is not getting more fouls called on the opposing team when he shoots the ball.