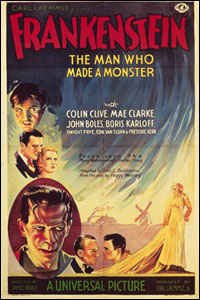 Untitled Document As part of its "100 Years, 100 Movies" Screening Series, AFI presents the original, black-and-white Frankenstein on the big screen on Wednesday evening, Feb. 1 at 8 p.m.

The film, directed by James Whale (who was the subject of the 1998 film Gods and Monsters), stars the legendary Boris Karloff as Frankenstein’s monster – a big, scary, walking medical experiment constructed by the somewhat eccentric Doctor Henry Frankenstein. The Doctor (Colin Clive), who was banned from the medical community because of his "ideas," decides he wants to construct – from scratch (and cadaver parts) – a living, breathing man in his own image.

What he gets, though, is the monster – who, after leaving Doctor Frankenstein’s lab – begins to terrorize the small town nearby while in search of meaning about his own history. The film, which also co-stars Mae Clarke as Doctor Frankenstein’s girlfriend, is a real treat to see on the big screen.

ArcLight Cinemas is located at 6360 W. Sunset Blvd. (between Vine and Ivar, with DeLongpre to the south), in Los Angeles. Parking is available in the garage adjacent to the theatres. Self-park entrances are off Ivar to the west, DeLongpre to the south and off Sunset, just east of the Cinerama Dome. For more information or to purchase tickets for this screening, visit www.arclightcinemas.com.
Article posted on 1/24/2006
This article has been viewed 2632 times.