Will Arnett, Katherine Heigl Get Nutty in The Nut Job 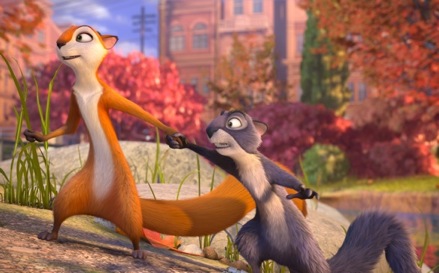 Katherine Heigl (L) and Will Arnett (R) get a grasp on being cartoon voice-overs.
(Credit: Toonbox)

The Nut Job is the latest animated feature film hitting theaters this month. It follows the travails of Surly (voiced by Will Arnett), a mischievous squirrel, and his rat friend Buddy, who plan a nut store heist of outrageous proportions, unwittingly finding themselves embroiled in a much more complicated and hilarious adventure.

The movie kicks off in idyllic “Liberty Park,” an oasis nestled within the sprawling ‘50s metropolis of fictional Oakton City. The park is host to a variety of winged and footed creatures - mice, ground hogs, rats… and of course, squirrels. Lots of squirrels.

“I don’t think there has ever been an animated movie purely about squirrels,” said director Peter Lepeniotis. “Usually, they play supporting roles. They’re fascinating rodents. In large cities, we don’t even notice them.”

In a funny twist to the classic romantic triangle, the director explained, “Grayson’s after Andie, Andie is secretly after Surly, and Surly secretly wants to be like Grayson.”

Though he may be best known for his small screen roles in “Arrested Development,” “30 Rock” and “The Millers,” Arnett is no stranger to big screen animated movies. The Nut Job is his latest voice role following Despicable Me, Horton Hears a Who! and Ratatouille, among others.

“For Surly, I always knew I wanted Will Arnett. Other actors came up, but I always pushed for Will,” Lepeniotis explained. “Will has that superb comedic timing, mixed with the charm and wit this character required.”

Arnett joked about his affinity for voice-over roles versus live-action roles: “I think that most people would say that they prefer not to have to see my face…I'm an idiot. I get it. But, they're different. They each have their pros and cons, of course, and doing something like this is fun because you can kind of create the world. You can kind of do anything. You can go off and be crazy and um, it's just a different experience. It's a different discipline.”

Playing the straight, uh, squirrel to all the other nuts in the film is Heigl. The character of Andie is headstrong, principled and incorruptible in her mission to protect and stand by the park’s rule of law, a difficult task when crazies surround you.

“Katherine’s character really unifies and glues all the characters together,” reflected producer Graham Moloy. “She grounds the movie, both as the romantic lead to Surly and the moral compass of the film.”

Heigl was cautiously excited about her first voice-over role in an animated film.

“I just really wanted to be a part of something that I could share with my kids,” she said, “and we're BIG animated movie watchers. I think we pretty much queue something up every night to watch with the kids. I thought it would be fun if I was actually in [the movie]…It was a little intimidating, and I was very self-conscious, which is the absolute worst thing that you can be as an actor. You cannot be self-conscious.”

All actors experiencing the voice-over world for the first time have to adapt to a new way of acting, so to speak, and rom-com veteran Heigl was no different.

“It was really awkward and strange, and then you start getting into it, and you're alone, in this room, with a microphone, and [the crew is behind] a glass window watching you, and you're jumping around and doing all this weird stuff. You're kind of on your own when you're doing it…in live action, you're working with someone else and what they do.”

“You have to do what they call exertion, which is like falling or whatever. They're on the other side of the booth and they're like, ‘Okay, now you're getting hit in the face by a 2x4 and then you fall three stories and... go!’ You're like, ‘What? How would I sound like if...oomph, aaaah?’"

Though it might be a different discipline and a different muscle, these comedy stalwarts promise the same result: countless laughs for everyone.

Enter to win a prize pack from The Nut Job by clicking here.

Are College Students Too Old for Animated Films? Click here to find out!