Turnovers, and Not Forcing Them, are Hurting Lakers 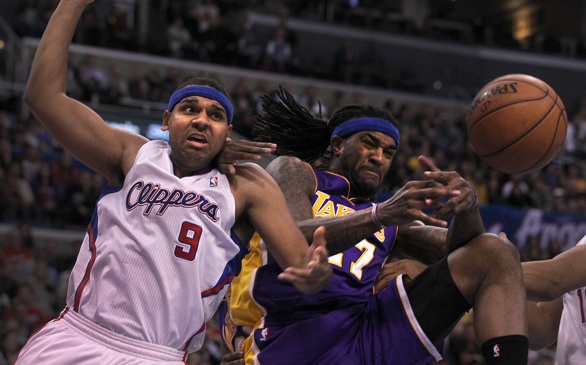 Everyone knows the Lakers turn the ball over way too often to be a playoff team.

But they're being crushed in another turnover category. They're not forcing any.

Translation: They're too slow.

The Lakers are 27th in the NBA in turnovers, committing 15.4 a game, and are actually worse in turnovers forced, tied for 28th at a minuscule 12.7 a game.

Kendall Marshall has been better than expected since taking over at point guard, but he hurts the Lakers in both turnover angles.

In the last three games, he has 14 turnovers and only one steal. He's averaging 0.33 steals per game since the Lakers signed him three weeks ago from the Development League.

Of the Lakers' issues, which are countless, the turnover discrepancy was grossly evident in their 123-87 loss Friday to the Clippers.

The Clippers had 16 steals, the Lakers only two. Foot speed, indeed.

Here's the sad part for Lakers fans — there aren't many solutions. Two at best.

Wait for their three injured point guards to return in two to three weeks.

Sacramento center DeMarcus Cousins leads all big men with 1.9 steals a game, followed by Atlanta's Paul Millsap at 1.6 a game.

It almost goes without saying that the Lakers are 28th in steals, averaging only 6.5 a game.

What's there to do?

"I've been playing this game since I was 3 or 2 as a kid," said forward Nick Young. "You've just got to enjoy it. You're a Laker and you've got to take it with pride and have fun out there."

The Lakers desperately need healthy guards. They might get one soon.

Versatile reserve Xavier Henry did some running, cutting and shooting Sunday, and followed it up with several minutes of rotating one on one against player-development coaches Mark Madsen and Larry Lewis.

Henry has missed six games because of a bone bruise and what the Lakers initially feared was cartilage damage in his right knee. He will be evaluated again Monday.

"There's still some issues that only get better with time," Henry said. "I think I'm close to being back, and I'm not sure how long, but it's feeling better."

Henry said it was possible he would play Tuesday against Cleveland. He is averaging 10.1 points in 21.8 minutes and has started five games this season.

Henry's return would be welcomed by the Lakers, who have two healthy guards — Marshall and Jodie Meeks.

Henry smiled when asked about the outcome of the one-on-one games. Madsen was the winner.

"He hit a good jumper on me, so shout-out to Mark," he said.