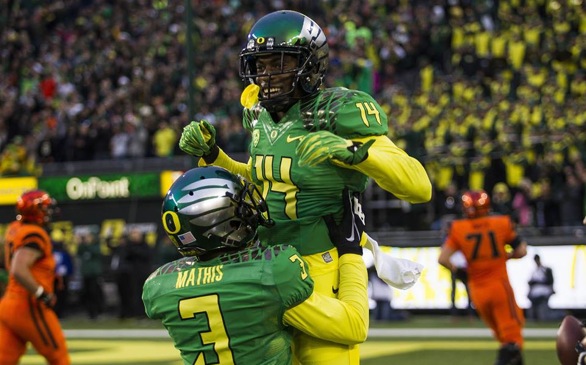 When Pac-12 football teams tee it up late next August, they’ll do so with the carrot of the new four-team college playoff at season’s end. But they’ll have to negotiate nine bruising conference games to get there.

The league in 2014 will be headlined by the nation’s best quarterbacks — Marcus Mariota of Oregon, UCLA’s Brett Hundley — and several prolific others. But rushers will have to emerge, as the top four of 2013 are bound for the NFL.

Synopsis: Easy to find Oregon’s flash beguiling, but it’s also true that of five Pac-12 first-team players back in ’14, Ducks have three of them, led by the electric Mariota. Coach Mark Helfrich should be better the second year. Much falls to longtime aide Don Pellum as defensive coordinator, and whether UO can be saltier against the run than the 165 yards a game it allowed in 2013.

Synopsis: UW had heavy early-entry losses to the NFL and needs continued positive arc from QB Cyler Miles. Schedule, both in and out of league, looks kinder. Key question might be the transition issue voiced last week by Rick Neuheisel on Pac-12 Networks: “Sark recruited a different kind of guy. They had edge, they had swag. There was a bunch of jumping around. Now comes Chris Petersen, who has openly said, ‘We recruit OKGs, our kind of guys.’ How many of these guys are going to be his kind of guys?”

Synopsis: We’ll find out how deep the well is at Stanford, because the Cardinal loses a boatload of big-time talent: 1,700-yard back Tyler Gaffney, road-grader David Yankey and terrific defenders like Trent Murphy, Shayne Skov, Ben Gardner and Josh Mauro. Safety Ed Reynolds might still leave early, too. Cardinal needs to diversify offense against a schedule including games at Oregon, Washington and UCLA.

Synopsis: Cougars had 35 turnovers in ’13, next-to-last in FBS, and still got to a bowl game. QB Connor Halliday should trim that total with all his receivers returning. Offensive line will be young, so will the secondary, and the defense (458 yards a game) needs to make serious strides. With a rugged schedule in Pullman (Oregon-USC-UW), Cougars must reclaim home-field advantage.

Synopsis: You know coach Mike Riley will spend the entire offseason devising a plan to goose a run game that averaged a mere 94 yards and put it all on the arm of QB Sean Mannion, who now must make do without Biletnikoff winner Brandin Cooks. Perhaps more alarming, the rush defense was worst in the league on a per-play (5.1) basis, something that could be improved by Miami defensive-tackle transfer Jalen Grimble, a one-time five-star Scout.com prospect.

Synopsis: In a different way, Bears had the tumultuous year WSU had in 2012 under Mike Leach, as Sonny Dykes fired two defensive aides and demoted coordinator Andy Buh. Still, they might not be as far from competitive as their 1-11 season suggests, with four proven defenders due to return from longterm injuries.

Synopsis: Thirty-four freshmen and sophomores played in the rout of USC, and 18 true freshmen got on the field in ’13. Now Hundley is back to bedevil defenses. Replacing linebackers Anthony Barr and Jordan Zumwalt is problematic, but Myles Jack is back and there’s no longer a question whether UCLA is gritty enough to win big.

Synopsis: Five Trojans (including primo wideout Marqise Lee) are early entries to the NFL, and DB Josh Shaw is still a possibility, so they might not even get to NCAA-trimmed scholarship ceiling of 75. QB Cody Kessler returns, but does Sarkisian open the spot up to Skyline product Max Browne? Transition might affect USC, but at least there’s stability now.

Synopsis: RichRod’s rebuild has taken hold, but now he has to cover for NFL-bound Ka’Deem Carey, and find a quarterback from an odd stew of redshirted freshman Anu Solomon plus four guys who began at other four-year schools. Receivers will be top-shelf, with Austin Hill returning from injury. ’Cats took a hit with decommitment last week of five-star cornerback Jalen Tabor.

Synopsis: Sun Devils’ defense is gutted, losing all six who made first- or second-team all-league. That will put a lot of pressure on QB Taylor Kelly, receiver Jaelen Strong and runner D.J. Foster. There’s good young talent in the oven, but it’ll need the forgiving September schedule (until UCLA on Sept. 25) to develop.

Synopsis: Buffs seem to be taking well to Mike MacIntyre’s regime, led by freshman QB Sefo Liufau and linebacker Addison Gillam. Wideout Paul Richardson departs a year early, but they have good young backs to upgrade the run game. More than that, they have to improve a rush defense that allowed a Pac-12-worst 208.5 yards a game before they’ll begin to be upwardly mobile.