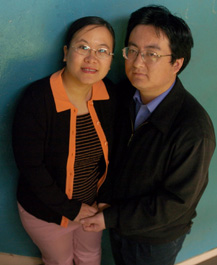 Untitled Document It used to be that the choice between a U.S. or foreign university was a no-brainer for top international students. If they gained admission to Harvard or Berkeley, their choice was made.

But the combined effects of the Sept. 11 attacks and other countries’ higher-education improvements have concerned U.S. educators who fear a drop in foreign student enrollment would threaten college engineering and science departments.

"Universities could not, in some cases, conduct research or teach classes without their very talented foreign students," says Peggy Blumenthal, executive vice president of the Institute of International Education, which tracks statistics on international students.

Some recent attendance figures have concerned educators, however. Last year, colleges and universities reported the lowest international undergraduate enrollment since 1999, while graduate enrollment dropped to its lowest level since 2000.

Education experts say increased visa hassles and other U.S. policies have sent the wrong message to the world’s students.

"There’s just a whole bunch of things that make people say, ‘Wait a minute, I don’t have to go through any of this to study anywhere else,’" says Victor Johnson, who directs public policy for the Association of International Educators in Washington, D.C. "It’s simply an undeniable fact that the United States isn’t a popular place in the world, and that does affect people’s propensity to study here."

The University of California-Berkeley enrolls nearly 2,700 international students from more than 100 countries, but enrollment – particularly at the graduate level – still has yet to bounce back to its pre-Sept. 11 numbers. The campus had a high of 950 international graduate students in 1999, but that number fell to 507 in 2002 before climbing to around 870 the past two years.

Nearly 600 of those foreign graduate students are in Berkeley’s engineering school – comprising 39 percent of the student body – and school and business officials fear a further decline could harm the technology industry. Universities across the country have struggled to attract American-born students to the math and science fields, but their efforts have largely failed.

While the visa process – criticized as cumbersome and unfriendly following the terrorist attacks – has been improved over the past couple of years, educators say they are facing a new and growing challenge: competition.

China is expected to award more doctorate degrees than the United States in five or 10 years, and India is also producing more doctorates than ever before. Australia and Europe have also beefed up their higher-education systems in the past five years.

"Unlike 20 years ago, other countries are actively recruiting students who previously would not have thought about going anywhere but the United States," says Heath Brown, director of research and policy analysis at the Council of Graduate Schools.

Brown and others are pushing for a coordinated recruitment strategy between the U.S. government and colleges, something that has proven difficult given the country’s highly independent education system.

But some students and officials say they don’t see why educators are so concerned. It’s logical for universities to have to compete for students, they say, and U.S. institutions already have an edge over the rest of the world.

In India, for example, the well-regarded top universities simply don’t have room for all the Indian students, said B.S. Prakash, India’s consul general in San Francisco. Exporting students to the United States is good for both countries, since many graduates return home to improve India’s economy, he says.

"In the big picture, India believes in globalization," Prakash says. "We don’t look at these things as win-loss."

Neither does Chris Yuan, a mechanical-engineering doctoral student at the University of California-Berkeley. The 27-year-old was encouraged by his Chinese employers to gain global knowledge by attending graduate school in the United States, so he left Beijing to work on a master’s degree in Texas.

Now he and his wife, a graduate student at California State University-East Bay, look forward to contributing to China’s economy.

"If I could get a good offer, I’d like to go back," Yuan says. "Family is there, many friends are there. It’s our home country."

Distributed by Knight Ridder/Tribune Information Services.
Article posted on 1/30/2006
This article has been viewed 1923 times.

Campus News
‘Adulting’ is hard. UC Berkeley has a class for that
588 views