Miley Cyrus Tells Us What to Expect on Bangerz Tour! 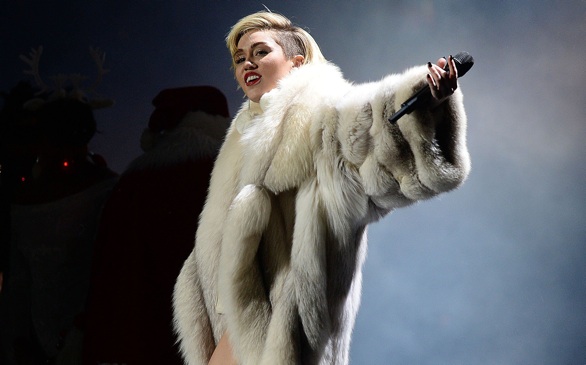 Love her or hate her, you have to agree that Miley Cyrus definitely knows how to put on an entertaining show! Since her last few performances have involved space kitties, "OMG!" moments, twerking and midgets, is it safe to say we should expect some crazy surprises during her upcoming Bangerz tour?

The "Wrecking Ball" singer spilled some juicy details about her tour, which begins on Valentine's Day, during a conference call Wednesday afternoon. Cyrus made it clear she wants her fans to have one hell of a good time and be involved in the show.

“The best thing for an artist is to see people singing along to your songs,” she said, “to have people participating in your shows. And sometimes that’s hard when you have people in the front row with just their cell phones in their face, not really getting involved. This show is a really hard show to not want to get up and be involved...”

So, here's what Cyrus has in store for her Bangerz tour!

1. Killer Set Design: Cyrus said she had to fight to get her screen inside the tour arenas because it's so big! "With this show, the most important thing to me was making it a show for people to remember," she said. “Some of the stuff we’re doing is so dope!” The stage will include the massive screen, new technology, graphing, 3D images and probably much more. “Everything will always feel big!” she promised.

2. Free Stuff for the Fans: She didn't tell us exactly what she's giving away, but she wants her fans to have something they can cherish forever. "I'm a little bit of a hoarder, so I hope my fans will kind of become hoarders also," she said. "I'm giving a lot of my junk away. I want to give [my fans] real things to collect..."

3. Animals: Expect cartoon animals and real animals in the show, including Cyrus' dog. "Our whole tour is literally based on animals,” she said. “I have my dog Floyd really involved in the show." Oh, and in case you're wondering if we get to see the kitty in space again: "We’re definitely bringing in some kitties," said Cyrus.

4. Mind-Blowing Entrance and Exit: Cyrus is really excited about her grand entrance and exit! "I have some crazy props to enter and exit on...” she teased.

5. Surprise Guests: She's touring with Sky Ferreira (a longtime friend) and Icona Pop. "I like to keep women working and more in the entertainment industry, and definitely have more women around me," she said. However, we might see surprise guests if Cyrus can get them on board, including Future, Juicy J and more!

6. Acoustic Session: The shows will run about 90 minutes, but Cyrus does have an acoustic session that will add more time. "My acoustic set can go on as long as I want,” she said. “It really depends on the city and how involved and how good the audience is.” She’ll be doing acoustic versions of her own songs, and she’ll also perform some covers.

7. Spontaneity: Cyrus made it clear that every show will be different. "I'm not someone who is super choreographed, or I don’t have someone telling me to do this or do that, so every show is going to be different. I don’t really rehearse too much when it comes to what we’re going to be doing on stage, because that takes all the fun out of it," she said.

BONUS: Cyrus also told us a little bit about her tour bus, which is going to be very, very girly with a lot of pink! "I'm bringing a few friends on the road...we're each going to design our own bunks. Me and my best friend, we call each other “dolls.” So, we want to make our bus look like a dollhouse of some sort, a Barbie dollhouse…It's going to make every dude want to puke."

Are you excited for Miley Cyrus to come to L.A.? She'll be performing at STAPLES Center on Feb. 22!