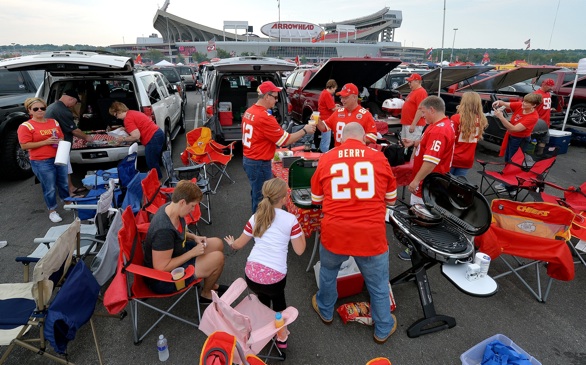 Tailgating is usually supposed to be fun, like this Kansas City Chiefs tailgate -- not end in death.
(Credit: John Sleezer/Kansas City Star/MCT))

Talk about a tailgating party from hell.

Eighty-six current and former members of the Sigma Phi Epsilon at Yale University are being sued for a tragic tailgating incident that occurred on the Harvard-Yale game day in 2011 and killed 30-year-old Nancy Barry, and injured a Yale student and a Harvard employee, reports the Los Angeles Times.

In the incident, Sigma Phi Epsilon member Brendan Ross was driving a rented U-Haul truck carrying beer kegs when he struck and killed Barry and injured the other two victims.

Sigma Phi Epsilon Executive Director Brian Warren told the Times, "SigEp maintains that the members of our fraternity who were not actively involved in the accident bear no responsibility for the tragic incident."

A lawyer representing the injured Yale student said he expects a trial to start in the spring or fall of next year.