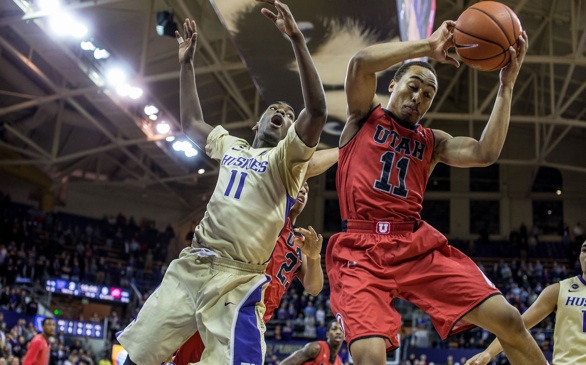 When USC opened its Pacific-12 Conference schedule less than two weeks ago, Trojans coach Andy Enfield said he thought his team could do “something” in conference play.

But the Trojans (9-7, 0-3) are still looking for their first victory and it will not be easy tonight when USC plays Utah in Salt Lake City. USC defeated Utah last season in Salt Lake City and has not lost at the Huntsman Center since 1995.

But the Utes are better than a year ago and USC is worse.

“We have to put together a 40-minute game,” USC point guard Pe’Shon Howard. “If we play like we did against Arizona (in Sunday), I think we’ll be fine.”

The fortunes of Howard mirror the Trojans the past three games. The senior hit a 3-pointer at the buzzer to upset Dayton on Dec. 22 but since then he is 5 for 24 from the field.

Enfield was more upset after Sunday’s 73-53 loss to No. 1-ranked Arizona about the Trojans’ carelessness with the basketball.

“Our guards have to do a better job of executing,” Enfield said. “Eighteen turnovers is too many.”

After Utah, the Trojans play at Colorado. The Buffaloes will still be a tough challenge despite losing leading scorer, Spencer Dinwiddie (14.7 points), who tore knee ligaments last weekend. Colorado also lost reserve forward Tre’Shaun Fletcher, who is out 6 to 8 weeks with a knee injury.

Enfield started 6-foot-9 freshman Strahinja Gavrilovic against Arizona in place of senior guard J.T. Terrell but that was probably more to match up to the Wildcats’ taller lineup.

Gavrilovic responded with a career-high 10 points. His previous high was five.

“I used my chance,” Gavrilovic said. “I think I played aggressively.”

When USC played Arizona at the Galen Center, there were several high-profile recruits, including uncommitted forwards Chimezi Metu of Lawndale and Chance Comanche of View Park in Los Angeles. Also in attendance were point guard Jordan McLaughlin of Etiwanda in Ontario, who signed with USC in November, and small forward Malik Marquetti of Long Beach Millikan, who committed to the Trojans last month.