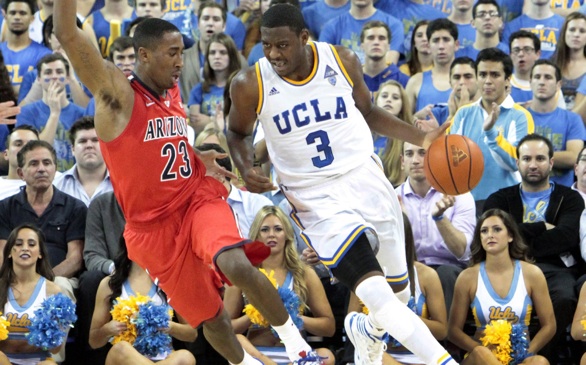 If no other Pac-12 team crawls up into the AP poll, the No. 21 Buffs will be the only ranked opponent left on the regular-season schedule.

Do-it-all junior Spencer Dinwiddie's season ended Sunday, when he tore his ACL on a non-contact play in a loss at Washington. The guard led the Buffs in scoring (14.7), assists (3.8) and steals (1.5).

Earlier this week, UCLA coach Steve Alford tried to downplay the significance of those losses.

"We have no idea what they do differently," he said. "It won't change our approach. ... There'll be somebody that they're going to implement that's been waiting for their chance. That's always a scary deal because you don't have as much information on those individuals.

"We have no idea if they'll tighten their lineup up or tighten what they like to do."

Added forward Travis Wear: "We can't get it in our heads that, 'Oh, they're missing their best player.' We can't overlook them."

Wear scored a career-high 23 points during UCLA's 78-75 win in Boulder last year, but hasn't come close to that output his senior season.

At 6-foot-10, 230 pounds, he is one of only three big men in UCLA's regular rotation. After a preseason appendectomy -- one he said he has fully recovered from -- he is averaging 5.9 points and 2.5 rebounds, almost exactly half his numbers as a junior.

The other two members of the trio haven't been much better. Twin brother David Wear puts up 7.1 points and 4.3 rebounds per game. Sophomore center Tony Parker is averaging 7.5 and 5.9.

And yet, UCLA dominated Arizona State on the boards in last week's 87-72 win, grabbing 13 more rebounds than the Sun Devils. Three nights prior, they held a halftime edge there over Arizona, which leads the conference with a plus-10.7 rebounding margin.

That the Bruins are making strides on the boards is a credit to the backcourt. Point guard Kyle Anderson flirts with a triple-double every time he takes the court. No player in the country has as multi-facted a stat line as his 15.3 points, 9.3 rebounds and 6.6 assists.

Even sophomore wing Jordan Adams is trending up. He averages 5.5 per game, and has cleared double digits twice this season.

"I think it's one of the few things we've gotten better at," Anderson said. "The hard part is to keep it up, to be consistent with it. ... It's just something you've got to have internally.

"You've just got to have heart, tell yourself, 'I'm going to get this rebound. Nobody is going to get it besides me.'"