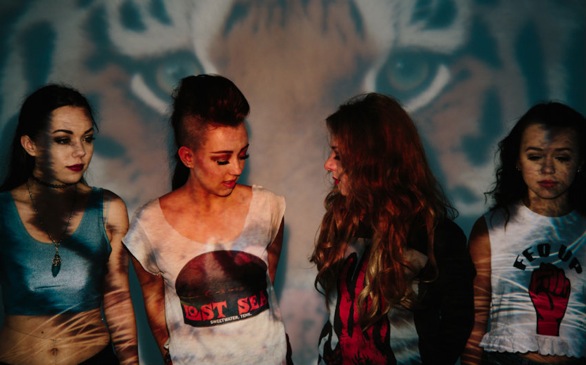 ANGELIQUE KIDJO BOOK SIGNING AT LIBRARY
One of the main proponents of African music the past couple of decades has been Benin-born Angelique Kidjo, and now it’s time for the world music star to tell her story. Kidjo has just released her autobiography Spirit Rising: My Life, My Music, an enlightening read that touches on everything, including her escape from (at the time) communist-ruled Benin, singing with James Brown over the phone, anecdotes about her many musical collaborations with stars like Carlos Santana, Alicia Keys and Joss Stone, and an explanation of her efforts to help end the practice of excision (female circumcision.) Kidjo will sign copies of her book at the Mark Taper Auditorium at the Central branch of the Los Angeles Public Library on Jan. 23, where she’ll also perform two or three songs. Attendees will likely be among the first to hear music from Kidjo’s new album Eve, scheduled to drop on Jan. 28.

VON GREY: AWAKENING
Conan O’Brien and his Team Coco are big supporters of alt/folk poppers von Grey, so much so that they’ve even made up their own nickname for the four-piece Atlanta-based band: Mumford & Daughters. The appellation is completely appropriate; the songs of sisters Annika, Fiona, Petra and Kathryn von Grey is steeped in Americana, drenched in sweet harmony vocals and set to music featuring violin, banjo, mandolin, lap steel guitar and cello. The band’s new EP is a six-song effort entitled Awakening and, with first single “Come On,” the jangly “Keep it Cool” and the protest song “Ashes” leading the way, the siblings are very likely to awaken a whole new batch of fans. Awakening drops on Jan. 21. www.vongreymusic.com

EXPERIENCING NIRVANA: GRUNGE IN EUROPE, 1989
Followers of the early days of the grunge scene and Nirvana fans in particular will love Experiencing Nirvana: Grunge in Europe 1989, a new coffee table-style photography book from Bruce Pavitt, the co-founder of the Sub Pop label that Nirvana was signed to at the time. The photos, mostly previously unseen, were taken in various European cities during an eight-day span of a six-week Mudhoney/Tad/Nirvana tour and many of the shots are of mercurial Nirvana front man Kurt Cobain. The pictures are the stars of the book, but there’s also day-by-day commentary from Pavitt that reveals that the tour almost caused the end of the band; after a bad on-stage experience in Rome, Cobain decided to break up the band but was eventually dissuaded by Pavitt’s counseling and offer of incentives to continue. Nirvana’s subsequent massive success and tragic end are well known, but Experiencing Nirvana details a little-known and very critical period in the band’s career. Available now from Bazillion Points books.

MARRAM RELEASE AND BOATS COMPILATION TO AID DALIT KIDS
Scottish arts community Transgressive North has curated two new albums that will benefit an outreach program to aid the Dalit “untouchable” children in south east India. The first is Sun Choir by Marram, an aggregation featuring Jarvis Cocker, Owen Pallett, doseone, Irvine Welsh, Margaret Bennett, White Hinterland and the Light of Love Children’s Choir. The other release is a various artists compilation called BOATS, featuring 20 tracks by the likes of Deerhoof, Califone, Four Tet, Gang Gang Dance, No Age, Bear in Heaven, Sunny Day in Glasgow, Sun Airway, YACHT, the Ruby Suns, Taken By Trees, Rustie and many others. Proceeds from both recordings will go to Love in Action, the charity working with the kids. All the details are available at www.everythingisnewproject.com

HALF NOTES
FEVER THE GHOST – The four songs on the Crab in Honey EP from this L.A.-based psych act are garnering comparisons to masters of the genre like Pink Floyd, the Electric Prunes and the Seeds. Available Jan. 21.

MUTUAL BENEFIT – Love’s Crushing Diamond is the new one from the group named “Band to Watch” by Stereogum; catch them live at the Center for the Arts Eagle Rock Jan. 28.

NATURAL CHILD – Their Dancin’ With Wolves doesn’t drop until Feb. 25, but you can preview the new music when the band plays the Bootleg Theater Jan. 31.

PASSAFIRE – This cleverly-named band has hit No. 1 on the Billboard and iTunes reggae charts with their recently-released album Vines; hear the new music for yourself when they take the stage at the Viper Room Jan. 29.