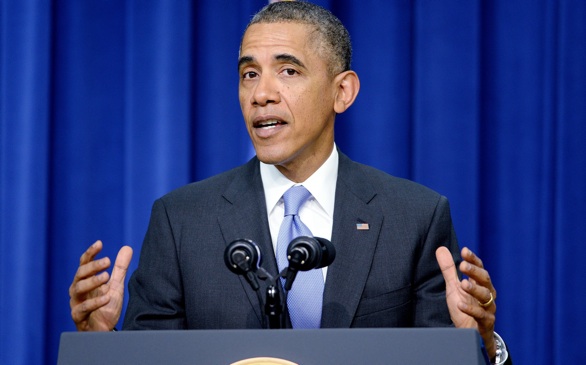 California higher education leaders joined more than 100 other college and university presidents at the White House on Thursday and pledged to redouble efforts to enroll more smart, low-income students on their campuses.

Those are just some of the dozens of initiatives promised by higher education leaders who responded to a call from President Obama and first lady Michelle Obama to expand college-going rates among millions of students who don't consider themselves college material.

"We can do more," said Janet Napolitano, president of the University of California, who announced that UC will begin an "aggressive outreach" program to give such students the push they need to continue their schooling.

UC will work with the College Board, which runs the nation's SAT program, to identify and try to inspire thousands of students who take the PSAT, a pretest for younger students, but never go on to take the crucial college exam, she said.

"We have a national crisis," he said after the summit. "Education is an antidote to the things that are plaguing America - violence, social immobility - and the necessity in the knowledge economy to get beyond a high school education."

The Obamas invited college and business leaders, philanthropists, researchers and nonprofits to a daylong summit intended to push them to take steps that won't require congressional approval.

There, CSU and UC, and the heads of UC campuses at Berkeley, Davis, Merced and San Diego, told of efforts to reach what Obama called "a huge cohort of talent we're not tapping."

Troy Simon of New Orleans once exemplified that cohort. He told the audience he didn't learn to read until he was 14.

"I was held back twice. I started fights - anything to get myself out of the classroom," he said, adding that he watched his world collapse during Hurricane Katrina and slept in an abandoned building for a year. When he realized that his younger siblings were imitating his behavior, he said, "I decided to change my life."

Simon contacted former teachers, spent hours in the library and joined College Track, an Oakland-based program that mimics what parents do to help their children enter and succeed in college.

If he earns a degree before age 25, he'll be among just the 10 percent of low-income people who do so. By contrast, about 50 percent of people from high-income families earn degrees by that age, according to research from the Russell Sage Foundation included in a White House report released Thursday.

UC, for example, spends a third of its tuition revenue on financial aid so students whose families earn up to $80,000 pay no tuition, Napolitano said.

At CSU, more than half of the 437,000 students are underrepresented minorities - Latinos, African Americans and American Indians - and 40 percent are poor enough to qualify for federal Pell Grants.

Yet Napolitano and White said they agreed with Michelle Obama, who urged colleges and businesses to take "real, meaningful action" to enroll more low-income students.