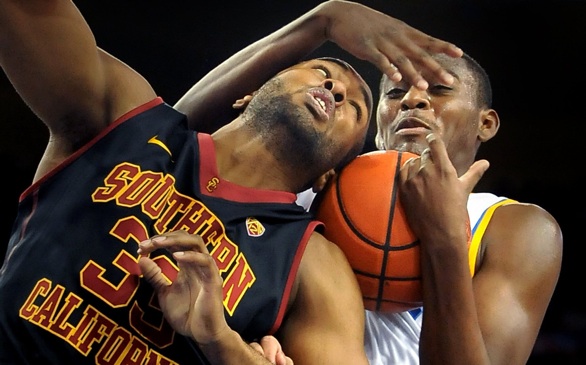 USC sits in last place in the Pacific-12 Conference and things hardly get better tonight at 8 p.m. when the Trojans host California, which is tied for first place. So is this year just a complete waste with USC on a five-game losing streak?

“They played five teams that frankly are better than them and have better players,” said Matt Muehlebach, an analyst for the Pac-12 Network who watched USC play several times this season. “SC’s had a tough schedule so far.”

One issue for the talent-challenged Trojans is trying to play new coach Andy Enfield’s Dunk City style with less-than-ideal personnel.

“I thought about that a lot,” Muehlebach said. “I think what they are doing is kind of a modified Dunk City. I think he wants to play way faster but he doesn’t have the team built the way he wants to.”

“They can beat most teams at home outside of Arizona and maybe UCLA,” he said. “It really takes four-to-five years to get where (USC wants to be).”

Muehlebach added part of the transition can be when a coach comes to the Pac-12 from another conference.

“The talent level in football and basketball when people move out of their conference to the Pac-12, people are surprised,” he said.

Despite USC’s record (9-9, 0-5), Enfield said the Trojans are not discouraged by their poor Pac-12 start.

“I know our players are frustrated,” he said. “But they’re enthusiastic and played hard. They cared for each other (in losses at Utah and Colorado). It is frustrating for our players and coaches. I am proud of the team. It is challenging to keep your enthusiasm and morale up.”

“Teams have gone on runs and we haven’t been able to stop them,” Enfield said. “We need to handle those runs a little better and I need to do a better job of managing the game.”

One of Enfield’s goals is for shooting guard J.T. Terrell to improve his shot selection.

“J.T. is explosive when he takes good shots,” Enfield said. “The problem in games comes when he takes contested jump shots. That’s the difference between shooting in the mid-30s (percentage) and the mid-40s in shot selection.”