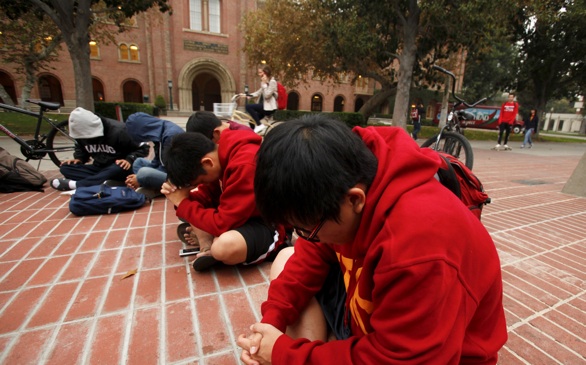 USC students pray near the site on campus where four people were shot during a Halloween party.
(Credit: Mark Boster/ Los Angeles Times/MCT)

In 2012, USC students were expecting to have a good time at an on-campus Halloween party at the Ronald Tutor Campus Center. Instead, what they experienced was a shooting that wounded four people.

Now, the Los Angeles Times reports prosecutors said Wednesday the man -- 21-year-old Brandon Spencer, a non-USC student -- accused of opening fire at that party was retaliating for his being shot by a rival gang member.

Reportedly, Spencer had a rivalry with Hall that stemmed from gang affiliations. At the USC party, Spencer ran into Hall, they argued and shots were fired.