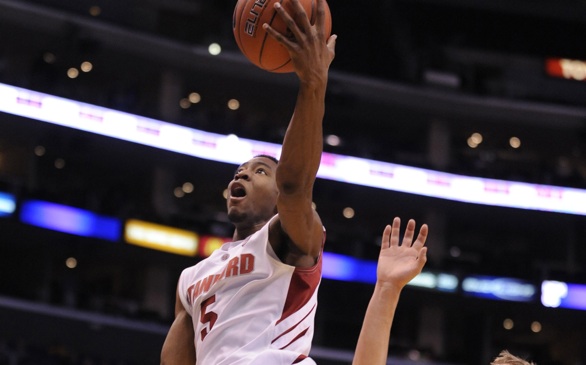 Of UCLA’s myriad concerns heading into an 8 p.m. Thursday tipoff against Stanford — a suddenly stuttering offense, a middling defense — perhaps most worrisome is guard Chasson Randle.

Last Saturday, Randle lit up Washington for 33 points, tying a career high while making just one 3-pointer in the Cardinal’s 79-67 victory. The junior earned 13 attempts from the line, the third time this season he has taken double-digit free throws in a game. On five other occasions, he was one short of the mark.

“He’s a good player,” Huskies coach Lorenzo Romar said. “There were times there were three bodies in the vicinity, and he was still able to knife through. A couple of times, we had him cut off, and he spun away from that defender.

That could spell trouble for the Bruins, who have allowed opponents to shoot 48.2 percent inside the arc. Only Washington State (also 48.2) and Oregon (49.3) rank worse in the Pac-12. Those two teams have combined for a 2-9 conference record.

But Randle, third in the league with 19.5 points per game, can be prone to off-nights. Against WSU and Houston, he failed to score in double digits and took just two free throws in each outing.

UCLA’s own leading scorer has seen his point totals dip over the past month, but has bumped up his contributions elsewhere.

Since pouring in 22 points in a Dec. 7 loss at Missouri, sophomore wing Jordan Adams’ per-game average has dipped with each passing game. Then at 21.6, he now sits at 17.4. He has cleared the 20 points just once over that stretch, a mark he missed just twice in his first nine games.

Adams has more than made up for that with rebounds and steals. He collected 35 boards in his last four games, spurring a renaissance on the glass for UCLA. Ranked the conference’s worst rebounding team a year ago, the Bruins are now second in rebounding margin (+5.2) in Pac-12 play, behind only No. 1 Arizona.

The 6-foot-5 guard also averages 3.2 steals per game. His 5.84 steal percentage, a stat that divides steals by defensive possessions, is third-best in college basketball.

Coming off a career-high 28 points at Utah, Kyle Anderson earned himself a spot on a prestigious mid-season watchlist.

Arguably the nation’s most consistent triple-double threat, the sophomore point guard is among 25 players who made the Wooden Award list, announced Monday by the Los Angeles Athletic Club. Anderson is averaging 15.5 points, 8.9 rebounds and 6.6 assists, and leads the Bruins in the latter two categories.

But his versatile skill set was on display even when he played point forward as a freshman; it’s offensive growth that has built a his case for being the league’s most valuable player. After shooting 21.1 percent from 3-point range last season, he’s up to an astounding 53.1 percent. He is one made 3-pointer short of the 1.0-per-game requirement for the Pac-12 leaderboard, but would be ranked third.

Three other conference players also made the mid-season cut: Arizona forward Aaron Gordon and guard Nick Johnson, and Oregon guard Joseph Young. The official Wooden Award ballot will list 20 players, though those who aren’t on the mid- season list are still eligible for inclusion.