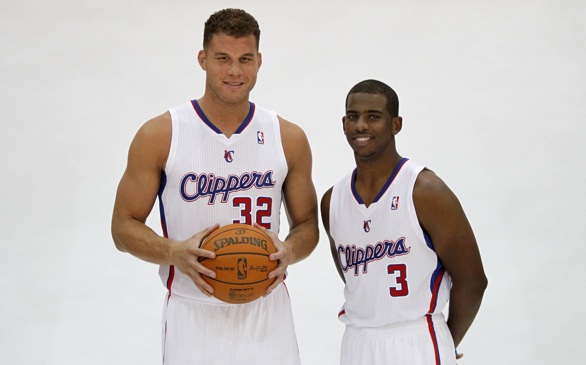 Lakers guard Kobe Bryant was elected by fans to his 16th All-Star game, second-most in NBA history, and Clippers forward Blake Griffin was also named Thursday as a starter for the Western Conference.

But it was somewhat of a surprise that Clippers point guard Chris Paul, a six-time All Star, wasn't voted in as a starter for the West team.

Bryant has played only six games this season because of injuries and has said he shouldn't be voted in as a starter. He will be sidelined until at least early next month, but he remains one of the league's most popular players.

Perhaps the biggest surprise was that Minnesota Timberwolves forward Kevin Love was voted in as a frontcourt starter for the West, finishing about 8,000 votes ahead of Houston center Dwight Howard to become Minnesota's first All-Star starter since Kevin Garnett in 2007.

"I was hoping for the best and preparing for the worst," Love said. "Right now, I'm very happy."

Oklahoma City Thunder forward Kevin Durant, who had the second-most votes (1,396,294) in the NBA balloting, rounds out the West frontcourt starters.

Miami Heat forward LeBron James, who received the most votes of any player (1,416,419), will start for the Eastern Conference. It will be James' 10th All-Star game appearance.

James will be joined in the East frontcourt by Indiana's Paul George and New York's Carmelo Anthony.

Miami's Dwyane Wade (10th All-Star game) and Cleveland's Kyrie Irving will start in the backcourt for the East.

Griffin will be playing in his fourth straight All-Star game, his third as a starter. He leads the Clippers in scoring (22.6 points) and is second in rebounds (10.0).

The 63rd NBA All-Star game will be played Feb. 16 in New Orleans.

"I am honored to be selected a starter for the All-Star game," Griffin said in a statement. "It means a lot for it to come from the fans and I look forward to representing the Clippers in New Orleans."

Paul is expected to miss another four weeks with a separated right shoulder. On Wednesday he said that he still hoped to play in the All-Star game. "Any time you have that opportunity, I'm not going to pass it up," Paul said.

The only way Paul can make the team is if he selected by the coaches as a reserve. That announcement will be next Thursday.