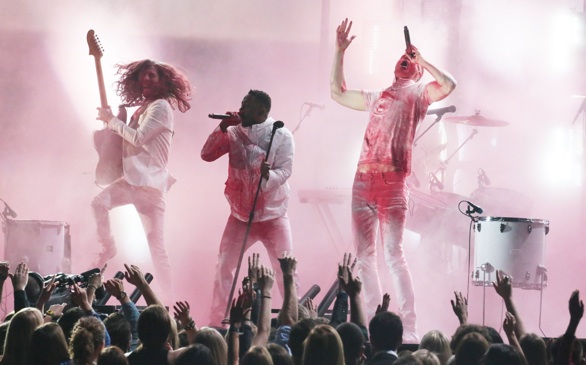 Sunday night's 56th Annual GRAMMY Awards was full of surprises, including a few standout performances that made for an extremely exciting awards show.

Here are the top five performances from this year's GRAMMYs:

5. Daft Punk, Pharrell Williams, Nile Rodgers and Stevie Wonder
It's been six years since we've seen Daft Punk perform live on television. Heavy with anticipation, audiences sat in front of their TV screens as they waited for the robotic duo to take the stage.

However, first up were Pharrell Williams (and his oddly shaped hat), Nile Rodgers of Chic and musical legend Stevie Wonder, who sang a rendition of Daft Punk's summer hit, "Get Lucky." All three were grooving to the beat, making it impossible for those in attendance to stay seated in their seats -- the dancing was infectious and even Jay Z and Beyonce were spotted cutting a rug!

When Daft Punk appeared, donning white helmets (of course), the energy became even more infectious. Performing Chic's "Le Freak," Wonder's "Another Star" and a little bit of Daft Punk's "Harder, Better, Faster, Stronger," this musical mash-up was one of the best of the night.

The pop songstress sang "Try" while being suspended in the air and performing crazy acrobatic tricks! P!nk looked as if she could've belonged in Cirque du Solei as she twirled and lifted herself in the air. At one point, she showed her super-human strength by holding all of her male dancer's weight with just her thighs and one arm - wow!

After showing off her skills, P!nk joined fun.'s Nate Reuss and sang "Just Give Me a Reason."

During the song, Queen Latifah came out and officiated a mass wedding for dozens of straight and gay couples. These 34 couples exchanged vows and rings as they celebrated their love and promoted equality.

A bonus surprise: Madonna came out and sang "Open Your Heart."

All in all, it was a heartwarming performance that gave me chills.

2. Beyoncé & Jay Z
Things got hot and steamy right off the bat when Beyoncé and her hubby Jay Z opened up the awards show, performing "Drunk in Love." These proud parents proved that just because you're married and have children, it doesn't mean you can't have "sexy time" with your boo.

Beyonce was flawless. Rocking a short blonde hairdo with a wet look, she danced seductively on a chair, crawling around it and gazing at the camera with "come hither!" eyes.

When Jay Z came on stage and performed his verse, you couldn't help but go "Awww!" and pray to God that you'll one day have a relationship that's half as fiery as theirs.

Imagine Dragons started the set singing "Radioactive," wearing spotless white shirts and pants. Then, Compton-native rapper Lamar (also wearing all white) got on the mic to perform "m.A.A.d City." Together, they stunned the crowd.

Lamar went hard on the mic, spitting rhymes at an impossible speed, and Imagine Dragons pounded these giant drums, giving off crazy energy that had everyone (especially Taylor Swift) dancing and bobbing their heads. Lights were flashing, Lamar took a couple hits on the drum, and everyone's white outfits were splatter with red paint by the end of the set. Simply amazing.

Opinion
Taylor Swift is sitting on top of the world
10,803 views

Opinion
Social media has helped One Direction keep going — but is end near?
1,940 views

Opinion
Beyoncé vs. Justin Timberlake: Who had the better MTV VMA Medley?
4,706 views