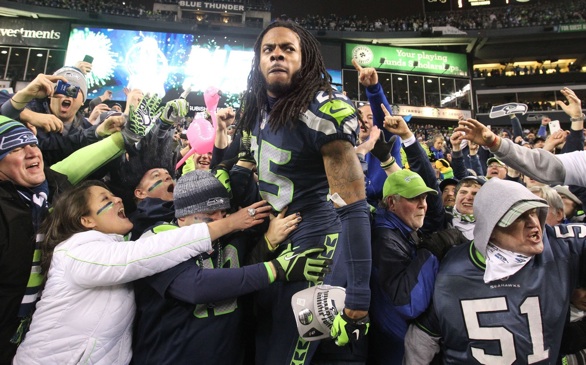 JERSEY CITY, N.J. — Seattle cornerback Richard Sherman left something to the imagination when he arrived for Super Bowl XLVIII.

No boasts. No bombast. No ripping the Seahawks’ opponent, the Denver Broncos or any of their receivers.

He wore a black T-shirt emblazoned with the words: “Motivational Slogan.”

“Everybody can fill in the blanks with whatever they got,” Sherman said of exactly what that meant.

Sherman filled the airwaves and notebooks and became a cause celebre for his comments and gestures disparaging San Francisco wide receiver Michael Crabtree after Sherman tipped away the 49ers’ last-gasp pass in the NFC championship game.

Sherman ignited a firestorm of commentary — criticized by some for his being too outspoken and for displaying the choke sign yet saluted by others for his unfiltered candor.

“In some people’s eyes, the comments overshadow the play because that’s what they were focusing on, but some people actually focused on the game, and they noticed the play and understood what kind of play it was,” said Sherman, who led the NFL with eight interceptions in 2013 and has 20 interceptions in just three NFL seasons.

“I’m just a guy trying to be the best, a guy who wants to help his team win and is a fiery competitor who goes out there and puts his life into his work and puts his everything and his passion into his work. A guy who’s come from humble beginnings and came from a place not a lot of people make it out of.

“I’m just trying to affect the world in a positive way.”

Indeed, Sherman plays with an attitude reflecting the rough neighborhood in which he was raised south of Los Angeles in Compton, forced to make the switch from wide receiver to cornerback at Stanford; and filled with the disappointment of being a fifth-round draft choice in 2011.

“I don’t think I’m a villain,” Sherman said. “I always say the old cliche, don’t judge a book by its cover, but they’re judging a book by its cover, they’re judging me . . . during a game, right after a game, and they’re not judging me off of who I am. Now if I had got arrested 10 times, or committed all of these crimes, or got suspended for fighting off of the field and all of that, then I could accept being a villain, but I’ve done nothing villainous.”

Sherman’s 18-second postgame tirade pulled the curtain from the sterile interviews from podiums and in the locker room most fans see on television and exposed the raw emotion felt on the field.

Sherman had just come off the field, having made a play that sent his team to the Super Bowl, and unlike most games, didn’t have 10 minutes in the locker room to cool off before being interviewed.

“It was a good portrayal for people who wonder what goes on on the field, how crazy, how emotional . . .” said former New York Giants defensive end Michael Strahan, now an analyst for Fox Sports. “Do guys really talk to each other like that . . .?’ Now you have a good feel for what goes on .. how guys react, how hyper guys are, how aggressive guys are .. .a lot of people were shocked, yes, but a lot of backlash unfairly came toward Richard because everybody wants to know what it’s like and wants to be on the inside, but when they get a glimpse of it, they get scared of it and they want to criticize the guy who did it.

“Richard is a good guy, he’s a smart guy, and he’s an inspirational player to a lot of kids who are going through some bad situations and growing up in not the best neighborhoods, but he made it out . . .”

Indeed, Sherman, who avoided the gang life and was a straight A student in high school, believes his zeal on the field and conduct off of it serves as a role model for the youngsters back home.

“Your circumstances don’t control your limits. You’re limitless, you’re a limitless person, you’re limitless by your faith, your abilities, your trust in yourself, your hard work, you can do as much as you want to do. If you go to school and get good grades and work as hard as you can, if you don’t have the materials, the school books, the things like that, people can help you with that. There will always be people out there that want to help kids like that, and I’m trying to help as many as I can. But to not go out there and work as hard as you can and give yourself the best possible chance to be successful you’re doing yourself a disservice. That’s really what I want the kids to know.”

Sherman was surprised of how much media attention his comments received.

“If I would’ve really known it was going to blow up like that, I probably would’ve approached it differently just in terms of the way it took away from my teammates’ great games,” he said. “(Safety) Kam Chancellor played a fantastic football game. He had an interception and huge plays in the game and played almost a perfect ballgame. Marshawn Lynch ran for 100 yards plus and had a great touchdown run. (Linebacker) Bobby Wagner had 15 tackles, so many people played so many great games that you would think the stories would be about them. So that’s the only thing I feel kind of regretful about.”

Still, Sherman’s teammates have nothing but admiration for how he carries himself.

“Richard Sherman is an unbelievable football player,” Seahawks quarterback Russell Wilson said. “He’s made all of the plays, he’s backed it up. I have tons of respect for him. He’s one of the most intelligent people you’ll ever meet. He plays the game of football with tons of passion, tons of fire.

“He has tremendous character, he really does. He got fired up, and I guess you can call it a mistake or whatever. He’s literally one of the most intelligent people that you’ll ever meet and he’s an All-Pro player and he has tons of respect across the league. “

Sherman was on his best behavior when asked about Denver, and in particular, his expected matchup with wide receiver Demaryius Thomas, the Broncos’ leading receiver with 92 receptions, including 14 touchdowns.

Unlike the disparaging comments about Crabtree, Sherman rated Thomas as one of the top five receivers in the league.

“He’s made the big catches, he’s made a lot of runs after the catch and turned small plays into huge plays,” Sherman said. “He’s a great receiver and great competitor. It’s going to be a fun matchup between us because we’re both intense competitors and good friends.”