The Calling: Waiting Two Be Heard 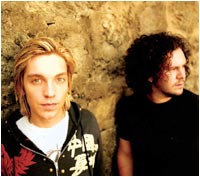 Italian girls just can’t seem to get enough of Alex Band, the sexy, deep-voiced lead singer of the rock/pop band The Calling. Long before the release of the band’s 2001 RCA debut album Camino Palmero, which spawned the international hit "Wherever You Will Go," a melodic, passionate, upbeat love song, Band grew up surrounded by curious, local Italians at his family’s summer estate in Giove, Italy.

"When I was a kid, my dad shot [films]," Band explains. "He’s a director for horror movies, so he shot a lot of movies there and we were always known as the Americans coming to the castle. The rest of the village and the rest of the medieval village around it always knew who we were, and the girls would try to come inside."

"But now you go to Italy and it’s just crazy," Band continues. "We’re extremely successful over in Europe and especially in Italy, so I can’t really walk around the city as much. There are people knocking at the door of the castle because they’ve figured out where it is."

The 22-year-old singer may soon have more than a group of love-sick Italian girls knocking at his door with the release of The Calling’s second album, Two, scheduled to hit stores June 8, the same day as Band’s 23rd birthday.

For two years, Band and his best friend and music partner Aaron Kamin have toured non-stop, promoting their multi-platinum debut album which has earned the Los Angeles-based duo a Best New Act award at the MTV European Music Awards. According to Band, such success is long overdue for The Calling.

"We had this bizarre situation where we were signed seven years ago. We spent four years kind of put on the shelf while our label wanted us to grow and develop," recalls Band. "When we finally made our first record, [the record label] made us wait another year to put it out," Band continues. "At that time, it made us want to kill ourselves."

During those formidable years, Band and Kamin not only honed their musical sound and style, but Band hit puberty and developed his now signature husky voice. "I’m really lucky that I’ve got a good voice. I guess I’m not your typical package," says Band.

Comparing himself to pop star Christina Aguilera, Band says big voices don’t necessarily come in big packages. "You have people like Christina Aguilera, who’s a really tiny, frail girl who I think has one of the greatest voices in the world, and you would never expect to see her singing the way you hear it. I don’t know why people relate a baritone voice like mine to big, fat Pavarotti," says Band.

Band’s booming voice caught the attention of BMG head Clive Davis, who wanted to produce The Calling’s new album after hearing Band collaborate with rock legend Carlos Santana for the 2003 summer hit "Why Don’t You & I."

"We were just extremely excited and happy that [Davis] would want to work with us on it because he doesn’t work with artists on these other labels," says Band.

Calling Davis the "last true record maker," Band says that there were major advantages to working with the music professional. "He’s on top of it. He knows everything. Whether he was in New York or whether he was in L.A., to get his opinion on things – especially with the sound of the record and have it mixed a certain way – that was the best part," says Band.

Unlike the first album, Band says Two touches on the bigger issues in life. The album is reflective of how much the world has changed in the past three years since 9/11. "I think we purposely wrote a positive record, a pretty uplifting record," says Band.

By January 2003, The Calling had finished their international tour, with Band and Kamin devoting their full attention to their second album. "We took our time," says Band. "We didn’t want to rush into it like a lot of people do on their sophomore record because we wanted to make a better record than the last one."

Although the two bandmates spend much of their time together on and off tour, the longtime friends have yet to tire of each other’s company. "I think that we respect ourselves more now as musicians and know that without the other one, we wouldn’t be here," says Band. "No matter how we work it, Aaron and I will always stay partners."

The musical duo not only plays music together but has also played matchmakers. Kamin first introduced Band to his 27-year-old fiancée, actress Jennifer Sky.

Personal growth and changes in Band’s life have inspired a more mature, rich and intimate sound on the new album. Band elaborates: "I’ve become more of an adult in the last three years and I’ve kind of grown into that, whereas before the first record came out, I was still a kid living with my parents."

According to Band, Two is not only a step forward from the last album but is also worth buying, whether you live in Italy or any other part of the world. "I think we write songs that are universal, no matter what country you live in, or what language you speak, or what your culture is," Band reveals. "All around the world people seem to understand what our songs are saying."