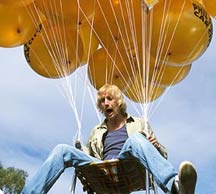 Rhys Ifans gained the attention of American audiences with his over-the-top portrayal of Spike, Hugh Grant’s sloppy, gangly roommate, in the 1999 hit romantic comedy Notting Hill. This summer, the Welsh-born actor returns to the independent film genre as the star of Danny Deckchair, a tale set in urban and provincial Australia. Since making his first splash on screens across the U.S., Ifans has been seen in supporting roles in films like The Replacements, The Shipping News and Little Nicky, the latter of which featured him as the pizza-eating, schnapps-swilling big brother opposite Adam Sandler.

Many on this side of the Atlantic don’t know that before playing Notting Hill’s Spike, Ifans had been acting in productions in the UK for many years. Ifans explains what happened after working with Hugh Grant and Julia Roberts, and what lead to his current role.

"I guess Notting Hill got me seen over here — you know, all of me," Ifans says with a chuckle. "There was more work from the states after Notting Hill. [Director/screenwriter] Jeff [Balsmeyer] had me in mind quite early on and he approached me with the script for Deckchair — I liked it and we made it."

Danny Deckchair follows the love-addled antics of Danny Morgan (Ifans), an Australian truck driver who’s eagerly waiting a vacation with his indifferent girlfriend Trudy (Justine Clarke), who’d rather stay home in Sydney and make money. As a result, Danny decides to leave the "old ball and chain" behind by attaching helium balloons to his lawn chair and floating away.

After a powerful thunderstorm blows him far from home, Danny finally lands in the small town of Clarence and falls head-over-heels for the town’s sole traffic cop Glenda (Miranda Otto, The Lord of the Rings). Eventually, the past and his crafty girlfriend catch up with Danny, and his newfound lease on life is taken to task.

According to Ifans, the film’s Down Under setting added a unique cinematic texture. "We shot this maybe two years ago — about 10 to11 weeks in Sydney, and in a town called Bellingdon in Byron Bay," says Ifans. He admits, "Danny Deckchair could only really happen somewhere as vast as Australia. To contain that metaphor, you need a huge place with this kind of mythical center to keep the metaphor-oriented point of things."

The premise of Danny Deckchair is loosely based on the true story of a man who actually did tie balloons to a chair and went on a flight (for a nice price, of course). He became an instant tabloid celebrity for doing so — not just once, but twice.

"The first time he went up, he dropped the gun. Then he was shot down," Ifans recounts. "There’s the famous line when he was being arrested and taken to the back of the van. They asked him, ‘Why’d you do it?’ He said, ‘A guy just can’t sit around all day.’"

After considering how the Deckchair tale might be imitated by thrill seekers looking for a new stunt to pull, Ifans assumes a "don’t-try-this-at-home-kids" tone. "I think that this [film] is ‘Jackass’ (the TV stunt show) with a Valentine’s card, so just be safe. When I started looking into it, there are so many instances of this happening all over the world. My god, if it catches on, I’m in big trouble!" he says with a laugh.

Ifans is well aware of the CGI-driven films with larger-than-life characters out on the market, and expounds on what makes Danny Deckchair special to him. "What I think was exciting about it, is that here we have a man, an ordinary man, who [just] does what he does. [He’s] not in search of an adrenaline rush or danger, but just because he’s looking for love," the actor explains.

"Actually, he does something that a superhero does in a blockbuster and that’s fly across half the world," Ifans continues. "So if you’re sick of seeing superheroes flying around town, go see this and watch your neighbor do it."

Danny Deckchair is currently in theaters.