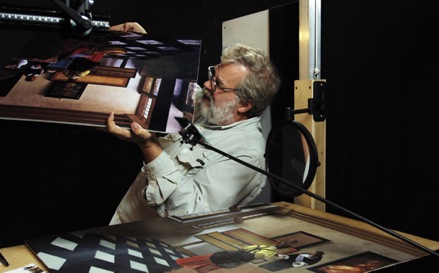 You probably heard about 17th century Dutch painter Johannes Vermeer when you saw the “Girl with a Pearl Earring" painting for the first time. This is one of Vermeer's many masterpieces. It’s a beautiful painting, and part of what makes it so stunning is this certain glow that seems to radiate off the canvas.

Vermeer was able to capture light in “Girl with a Pearl Earring” and in all of his other works, giving the paintings a sort of photographic or cinematic quality. This has some people believing Vermeer might have used an optical device while painting instead of only paint and a paintbrush. Tim Jenison is one of these people.

Founding NewTek in 1985, Texas-based Jenison led the way in development with a series of highly successful products, including DigiView, Digipaint and the Video Toaster. With his interests being primarily electronics, music, film and video, Jenison wasn’t a huge art enthusiast, and he was definitely not a painter -- that is, until he read Vermeer’s Camera by Philip Steadman.

Steadman held the belief Vermeer might have used a camera obscura (an old-school optical device that projects an image of its surroundings on a screen) to create his paintings. Eager and interested to see if this theory was correct, Jenison decide to attempt his own Vermeer painting, “The Music Lesson,” even though he had never picked up a paintbrush before. But instead of a camera obscura, Jenison hypothesized Vermeer used mirrors as he painted to capture light in his paintings.

To begin his project, Jenison created the room that’s shown in “The Music Lesson.” He placed models, a piano, a colorful rug, a cello and more in a self-constructed room that contained a window where sunlight could stream through. Basically, he created a real-life version of “The Music Lesson.”

After he created the room, Jenison positioned the mirrors over his canvas just right and painted what he saw reflected in the mirror, capturing the light that was right in front of him. The result: a very accurate replica of Vermeer’s “The Music Lesson.”

Recently, Jenison sat down with Campus Circle and talked more about the process of creating his own Vermeer painting and his thoughts on art, science and Vermeer.

Campus Circle: When you got frustrated or tired of painting for long periods of time, how would you relax and stay motivated to get this painting done?
Tim Jenison: I would take breaks every 15 or 20 minutes. I had to take a lot of aspirin for my back muscles; I was leaning over the whole time. There was also the tension of holding your hand stiff and trying to get the brush in the right spot. You’re looking down from about 8 inches above, and you’re lowering the brush, and you don’t know quite where it’s going to hit. If you go too far, it mushes up and messes up – it’s just tense. You have to relax.

I would go browse the web or play pinball or just walk around. As far as keeping myself going, I really didn’t have a choice. My friends, Penn and Teller [Teller directed the film, and Penn produced it], were counting on me….

As I got more and more paint on the canvas, it was more fun. I could see that it was probably going to work. It looked like a Vermeer.

CC: You set up one contraption with a single mirror to paint your first painting - a photograph of your father-in-law (which took 4-5 hours to make). You then used a more complicated mirror contraption to paint the Vermeer. Is there a way someone can use this mirror technique at home to paint whatever he or she wants?
TJ: Yes. If you wanted to do that simple set-up where I painted a photograph, it’s not hard once you get it set up. Getting it set up is not easy. That mirror has to be in the perfect spot or it won’t work. Also, it has to be a special kind of mirror.

Back in Vermeer’s time, they used metal mirrors a lot, and the mirror has to be silvered on the front side of the glass. That’s called a first surfaced mirror [you can find them on Google. You just want a small one, a few inches across]. You just have to mount it on a stick somehow. It has to be at a 45-degree angle, and then you have to move that mirror around so that it’s exactly at the right spot. When you move your head, nothing [the picture’s reflection and the canvas] shifts. If you have it in the wrong place and you move your head, it will move. One picture will move against the other one.

The other important thing is getting the same amount of light that is on your photograph on your paper. That has to match; that can’t change once you get started. You also have to set up the light in a place where you don’t get shadows on either the original [photo] or the canvas.

I think anybody can do it.

CC: Can you tell us more about the process of creating the room from “The Music Lesson”?
TJ: Vermeer painted in Delft, Holland. Delft, Holland is almost exactly the same as it was 350 years ago. It’s like time has not passed. Both of the buildings where Vermeer painted are gone…but you can stand on exactly the same spots, and there are museums there. I was able to take a lot of pictures of those chairs to make my reconstruction. I talked to a lot of art people in Holland. Basically, I worked from the painting to make a computer model of the room, and I took the computer model and put it into a computer-controlled lathe and milling machine and made the furniture that way (not that I wanted to be a woodworker).

I wanted it to look as close to the Vermeer as it could, because I didn’t know yet if it would work. But I felt like that if it did work, the closer the better…

I had to make the lens, because that’s the key to the whole thing. If I used a modern lens, it wouldn’t be a valid experiment. That was a lot of work, to research that and learn how to make lenses. I had to melt the glass, because I wanted imperfect glass. I wanted bubbles in it, some dirt. When you melt your own glass, it ends up being harder in certain spots and softer in certain spots…so I made a very imperfect lens, but it worked like a charm.

I got a little carried away building the room. It’s still set up there in San Antonio; it looks like a low-budget movie set.

CC: What kind of feedback have you been getting from art enthusiasts and historians since the completion of the film? Have a lot of them expressed anger or doubt after watching the documentary, or do the majority agree with the theory Vermeer used optical devices?
TJ: David Hockney wrote this book [Secret Knowledge: Rediscovering Techniques of the Old Masters, referenced in the film] 12 years ago, and he just caused this flame war with art historians. These art historians have written big, thick books about Vermeer and how he did it. But there’s nothing known about Vermeer; there’s no real history. All we have are his paintings.

So, this theory comes along, and it’s different from theirs, and they [the art historians] have to say something. They started screaming at David Hockney. There was this big meeting in New York, and it turned into a "brawl."

We expected that some people would be irate, but almost everybody has been extremely nice about this...In one review, the guy said, “I don’t think Vermeer did this. He’s magical, and Tim’s isn’t magical.” Basically, that’s what we expected people to say. We’re not saying it’s proof; we’re saying this could’ve worked, and that’s all we’re claiming.

CC: I read in Entertainment Weekly you might do a similar experiment on the artist Caravaggio. Do you think you’ll attempt to do a whole painting, and would you want to make another documentary about it?
TJ: I might do an experiment. I’m not going to make a film, and I don’t know if I’ll work up the ambition to paint Caravaggio.

He painted a long time before Vermeer, and Caravaggio made these really realistic pictures, and he basically started a whole school of art called the "Caravaggisti"…the modeling of the light on the faces is very accurate. My theory that I’m thinking about is that he used just a simple flat mirror, kind of like my father-in-law set-up except there’s a real human head there. I tried it out just with some sketching, and it does seem to work…If I was going to paint your face…the distances have to be really close to work. One of the side effects is that is you have to paint the head at life size; it has to be exactly the same size. If you look at the Caravaggios in the museum, they’re life-size.

CC: Since completing the painting, do you consider Vermeer any less of an artist because he probably used optical devices? Why or why not?
TJ: There’s this term “Renaissance Man.” People in the Renaissance knew art and science. They knew basically a lot about everything. There wasn’t this ivory tower of art that we have today. It was a totally different attitude…

I don’t think any less of Vermeer at all. I think he was…I don’t want to use the word ‘obsessive,’ but he worked really, really hard for art. If he did it this way – it was way harder to paint with this equipment than with just a brush. Rembrandt, who lived at the same time, painted well over 1,000 pictures in the same time Vermeer painted 40. It’s aggravating work. It’s very hard work. Vermeer did decide what to paint, who to put there and what to paint…they’re just beautiful pictures of beautiful Dutch people in their beautiful houses living beautiful lives. He just wanted to do that better than anybody else.

You can see the film in Los Angeles at the ArcLight and The Landmark, and at Angelika Film Center and Lincoln Plaza Cinemas in New York.

Enter to WIN an autographed poster for Tim's Vermeer by clicking here!