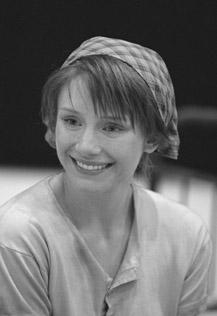 Untitled Document The set has been cleared, except for the actors, the director and one crew member. The director is Lars Von Trier and he is holding the camera, hovering over Bryce Dallas Howard, the star of his film, Manderlay. Is she intimidated yet?

"I really prefer it, actually," she says. "There’s an intensity there that isn’t there on normal movie sets."

This set is most certainly not normal. For the second film in his "USA – Land of Opportunities" trilogy, Von Trier is keeping with the minimalist stage that permeated Manderlay’s predecessor, Dogville. Almost the entire film takes place on this one set, where there are no walls, no doors, no grass, and where a crushing dust storm is portrayed with simple piles of red dirt. In Dogville, Nicole Kidman’s Grace eventually became a slave to the town. In Manderlay, Howard’s Grace tries to rescue this town of African Americans from slavery.

For Ron Howard’s daughter, this film was more than just another job.

"I learned how little I knew about the subject matter," she says. "It gave me an opportunity to go out on my own and research slavery and its repercussions. I had a realization that I didn’t know anything." Howard also had the chance to converse with Danny Glover, one of the other stars of the film, who she calls a "massive voice" in the African American community.

The film has already been targeted as drawing some parallels to the conflict in Iraq, with the lead character of some wealth coming to the town, taking it over and finding that it’s difficult to lead the group on her own.

Howard admits Von Trier and the cast had huge discussions about current events over dinner.

"He is illuminating issues," she says. "He’s very brave for doing that."

Von Trier, famous for such intense films as Dancer in the Dark and Breaking the Waves, reportedly made Kidman break down on the set of Dogville. There were apparently no such troubles filming Manderlay, and Howard even has funny images in her mind of Von Trier falling down a mountain on a snowboard.

Von Trier works differently than many directors. There was no rehearsal, Howard says. The cast wasn’t even allowed to ask questions. More remarkably, the Danish director asked Howard not to create a specific character. She didn’t speak to Kidman about the part, believing it would be more of a hindrance to her performance.

"The first eight to ten takes were spent getting rid of the garbage I came up with in my bedroom," she says. Von Trier’s use of digital video allows him to shoot for about an hour without stopping.

"It’s almost like play time," Howard says. "It was amazing how freeing it was. On a conventional film set, you get three or four takes. Here, you really get it out of your system completely. I did my best and my worst."

Laughing, Howard says she had no idea what the film would be like and she was surprised at the final product.

"I kept telling my friends, ‘I’m so funny in this movie.’ And then I spent the whole movie in tears."

At the end of the film, Grace makes her way towards Wasington, which is also the title of the third piece of the trilogy. Although Von Trier was originally going to use either one or three actresses for the three films, Howard says he might be bringing her and Kidman back for Wasington.

"I really want him to do that," she says. "It would be pretty awesome."

Manderlay is currently in theatres.
Article posted on 1/30/2006
This article has been viewed 4015 times.