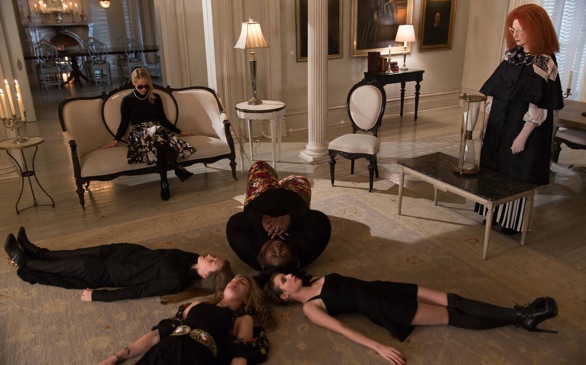 Wednesday night’s season finale of “American Horror Story: Coven” was full of surprises, making it one of the most entertaining season finales so far this year.

The show opened up with Stevie Nicks singing her song “Seven Wonders.” With the song blaring, the four young witches, Queenie, Madison, Zoe and Misty, practiced their magic for the Seven Wonders test, which would decide who would be the next Supreme.

In order to be declared the next Supreme, a young witch must perform all Seven Wonders. Throughout the test, humorous moments happened that made viewers laugh: Misty used mind control to make Queenie hit herself, Madison used mind control to get Kyle (who she was in lust with) to kiss her, and Zoe (who was in love with Kyle) did the same thing. Madison retaliated by having Kyle choke Zoe until Cordelia, the head of the school, used telekinesis to stop Kyle.

Another hilarious scene was when each witch used the power of decensum - the ability to go to hell and back - during the test. This power comes with a catch, however. Each witch that travels to hell has their own personal hell waiting for them. For example, Queenie’s hell was working at a chicken fast food place and Madison’s was performing “The Sound of Music” live on TV and not having the lead.

Although full of hilarious moments, this season finale had some scenes that brought die-hard fans to tears. Animal and nature-love Misty, who many viewers were rooting for, died when she got stuck in her personal hell, a Biology class where she had to dissect a living frog, leaving an empty hole in our hearts. Zoe died during the teleporting portion of the test (called transmutation) after she was impaled on a gate, killing her instantly.

When Zoe died, Madison had the power and chance to bring her back. But, being typical Madison, she refused to do so. After the test, Madison was packing her clothes in her suitcase when Kyle decided to pay her a little visit. Enraged Madison did not try to bring Zoe back to life, Kyle throws Madison on the bed and chokes her to death. It might’ve been a twist we never saw coming, but I was pleased to see Madison finally die -- I wanted her dead since the beginning of the season.

But wait – it turns out Kyle’s reason for killing Madison wasn’t valid at all. Cordelia ends up bringing Zoe back to life!

Full of deaths, rebirths and reunions (Cordelia is reunited with her mother, Fiona, before she eventually dies in her embrace), the third season of “American Horror Story” ended with a twisted, dark, mysterious and magical episode.

This FX miniseries might have been struggling to find its feet in the beginning, but it progressively got better.