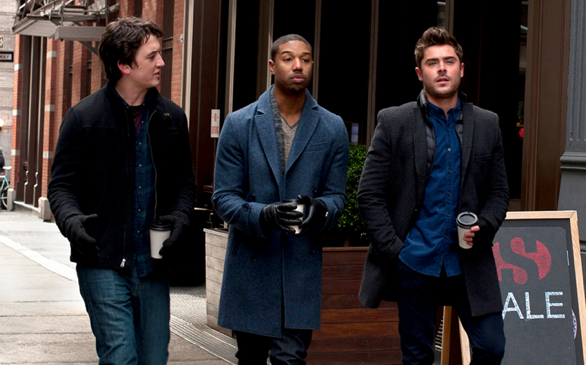 Following a traditional rom-com trajectory where guy meets girl, problems arise and then the grand gesture at the end, That Awkward Moment has a slightly modern take: instead of one man as the primary protagonist, there are three leading men dealing with similar issues.

When newly single Mikey (Michael B. Jordan, Fruitvale Station) is going through a divorce, his two best friends decide to make a pact to stay single in support. When Jason (Zac Efron, High School Musical) and Daniel (Miles Teller, The Spectacular Now) soon begin to get entangled in relationships themselves, mishaps ensue.

This is the next generation of 20-somethings who are going to star in many forthcoming films. Jordan and Teller are fresh off movies that garnered great reviews and buzz at last year's Sundance Film Festival. In addition, Efron is making a full emergence into movies that aren’t Disney related. They're the new Will Smith, Jude Law and Vince Vaughn.

Let’s start with what was good about the film. The three leads have great chemistry and a believable bromance. When they banter, it’s funny and relatable. Of course there are the typical frat boy poop references and the sexual shtick that has been done before, which brings the intelligence of the movie down. The timely, witty quips are much more appreciated.

That Awkward Moment is very much a dude film. However, only the ladies will come out in droves to see the attractive leads. Boyfriends will be dragged there, kicking and screaming, but they will be able to connect with the film's themes. It’s a Sex and the City for men with some pretty female ladies thrown in.

Imogen Poots (Fright Night) plays Ellie, a quirky, hip girl who catches Jason’s eye. She plays the part well, but sparks don’t quite fly between her and Efron. It becomes hard to root for a couple whose romance never really gets off the ground.

Mackenzie Davis (Smashed), who plays Chelsea, is Daniel’s wing-woman and has much more chemistry with Teller. Poor Jessica Lucas (Evil Dead) plays Vera, Mikey's ex-wife, and doesn’t have much to go on. Her story wasn’t flushed out sufficiently, which isn’t her fault.

Something in the film that sticks out like a sore thumb is the unrealistic apartments that these 20-somethings live in -- in New York City no less! Unless someone is funneling a good amount of money into their accounts or family is helping them, there is no way they can live like this.

Some of the writing felt disjointed as well, trying too hard at times to be funny and clever.

If you want to see a film that has some good eye candy and great shots of New York, then this is one to see. However, if you are looking for a new take on the rom-com genre, then pass on this and wait for the next attempt.