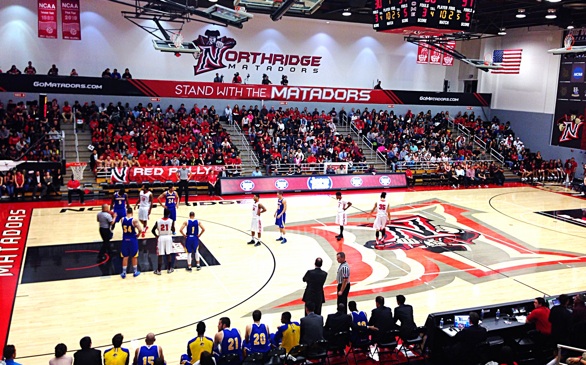 CSUN and UCR battle it out at the Matadome.
(Credit: Diego Girgado)

Thursday night’s game was a nail-biter, and it all came down to the last few seconds. I was on my feet cheering along with my fellow California State University, Northridge (CSUN) Matadors as the men's basketball team narrowly beat the University of California, Riverside (UCR) in overtime with a final score of 93-89.

Both teams had a combined total of 20 fouls, 10 fouls for each team. UCR had the chance to create a massive lead with all of the fouls, but each time a UCR basketball player approached the free throw line, he only made one out of the two baskets. On some occasions, the players made none.

CSUN made most of their free throws and only missed a few baskets. Both teams were aggressive with their offense; however, they lacked a strong defense.

The Matadors barely won, partly because CSUN had home-court advantage. Currently, the team has a 3-4 record in the conference, 11-11 overall.

If they want to continue winning games, CSUN needs to work on their fundamentals and teamwork.