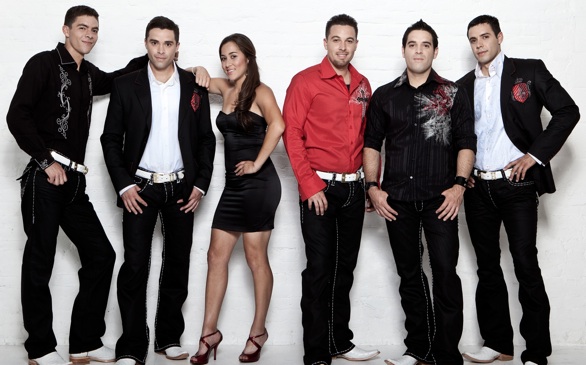 To describe Hermanos Herrera as simply another Norteno group would be a major understatement. The Hermanos are musicians, writers, scholars, comedians, foodies, rancheros, philanthropists, all-around lovers of life, and last but not least – they are a family.

You could easily be entertained for an entire day by just looking at the pictures they post every few hours on Facebook and Instagram of their performances, music videos, music samples, meals, family (and dog), and dozens of amazing landscapes from their continuous travels throughout California and the United States.

“Our first show ever was held at the Historic Ventura Theater,” stated Luis Herrera. “We opened up for the legendary band, Los Lobos. At the time, the band member ages ranged from three to nine. Now, all six siblings form part of the band, and we have added two other musical genres to the repertoire.”

They were inspired and influenced to continue the Herrera family’s musical legacy through their father who had his own musical group consisting of himself and his brothers (their uncles). Their father was so invested in the future of his children’s musical career to the point that he even had a Jarocho harp made for his eldest son before he was born.

“Our father performed in a band with his brothers, and we all wanted to be just like them,” explained Luis. “They specialized in playing Son Jarocho from the state of Veracruz in Mexico. That is the first style of music that we started performing.”

The band has taken the authenticity of traditional regional Mexican music from past generations to a younger crowd and has contributed numerous new hits that can be appreciated by audiences of all ages.

At live shows, you can expect to hear a blend of beloved Spanish classic songs such as “Tamarindo” and “Camaron Pelao,” as well as a selection of their self-written and composed original hits from their most recent album, En Tu Corazon, such as “El Dia” and “Culpable Soy Yo.”

Though music has been a major part of their upbringing, they were also raised to value hard work, quality education and giving back to the community. All of the siblings are University of California, Los Angeles (UCLA) graduates.

Some of the members continue to promote cultural awareness and show appreciation of their Mexican heritage with musical presentations and workshops at both the elementary school and collegiate levels. Luis is finishing a credential program with the hopes of teaching in his hometown of Fillmore. Miguel decided to further his education by entering in the MBA program at the University of Southern California.

The eldest, Jorge, is a professor of Chicano Studies at California State University, Fullerton (CSU Fullerton) and was asked to write a song based on the theme of education for Univision’s Education week. He teaches several Chicana/o music and Mexican history classes in the Chicana/o Studies department at CSU Fullerton.

The group has raised $10,000 through album sales to benefit their community and has previously assisted in countless fundraising and community service events, educating children and assisting those in need.

“Our goal with music has always been the same since day one,” explained Luis. “We want to work hard, improve every day, and have our music heard by as many people as possible.”

Hermanos Herrera have come a long way since their humble beginnings as young kids just trying to make their parents proud and continue to go above and beyond in their quest to leave a mark in the regional Mexican music industry, as well as in the educational community and on television. They leave their fans waiting in bated breath to witness their next big ventures and adventures.

Be sure to catch the Hermanos Herrera where they will be opening for Raymond Ayala on Feb. 21 at the Historic Ventura Theater in Ventura or at their reoccurring gigs at Disney’s California Adventure theme park located at the Disneyland Resort in Anaheim.

You can also get information about upcoming performances, album releases and news by going to the band’s website, hermanosherrera.com.