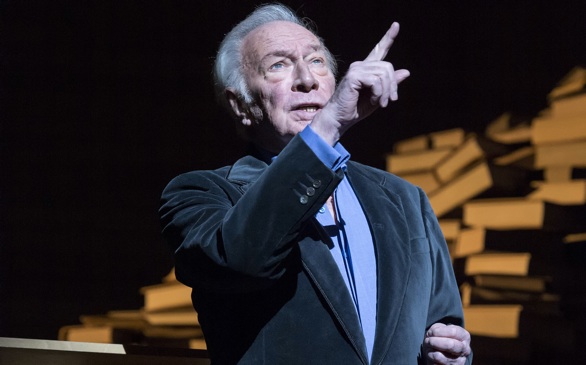 A word or two is all it is really. Combined with astounding (and sometimes not astounding) visual aids, words are the driving factor for theatre, television and film. They are the plot, character development and our most fundamental forms of adeptly conveying emotions and ideas. When we were young, they were our vessels to imagination through books written by  Seuss, Sendak and Dahl, to name a few.

The brilliant men and women who have been stringing together word upon word for centuries are as much our ancestors as our actual blood relatives. They may not help compose our DNA, but they certainly have helped structure the way we see the world around us.

Christopher Plummer, known for far more than his role as Captain Von Trapp in The Sound of Music, is one of the most dynamic actors still working today. He’s been in serious films like A Beautiful Mind and action movies like National Treasure. He’s even dabbled in rom-coms (please see Must Love Dogs). Plummer won his first Academy Award in 2012 for his role in Beginners, making him the oldest person to have won an Oscar at the tender age of 82.

His voice is familiar and soothing, perhaps because he narrated the beloved children’s classic Madeline, but his inflection is unwavering and commandeering. His accent can’t quite be pinned down; he's not British,  American or even Canadian, though he is a Toronto-native. For an 84-year-old, his voice rings clear and crisp, lacking the shakes and falters most find in old age.

Performing now through Feb. 9 at the Ahmanson Theatre, Plummer is on stage for an entire 80 minutes with no intermission and without misstep. He flits from stage right to left, transforming the words of famed writers and making them sound new. I couldn’t take my eyes off of him, nor did I want to turn my attention, even for just a moment, for fear of missing one impeccably delivered line. He can recite Shakespeare and Kipling, Milne and Nabokov as easily as ordering afternoon tea. The words rush through him and out of him like they’ve been there all along, waiting to be said in just the dramatic way he has intended. He is mesmerizing, funny and completely raw.

To say that Plummer’s one-man show is a marvelous spectacle, a testament to his love affair with literature would be an understatement. Plummer makes love to the words he recites and allows us, the audience, in for just a short period of time to witness the beauty and astonishingly intimate relationship he has with the English language.

Plummer has mastered the art of recitation – it is not memorizing, but true and pure performing. Do yourself a favor and see Plummer in his element. Under the skilled directorial hand of Des McAnuff, “A Word or Two” is not a large, over-the-top production, but merely one man putting it all out there, and we are so grateful that he does.