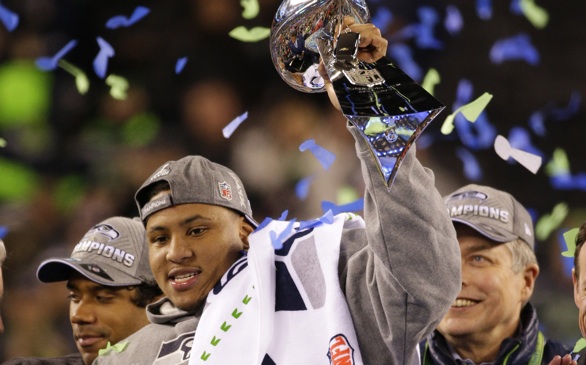 EAST RUTHERFORD, N.J. — Malcolm Smith was convinced the Seattle Seahawks could slow Peyton Manning. He figured he would make some plays to help his team win Super Bowl XLVIII.
The only thing he didn’t see coming was an MVP trophy.

“I always imagined myself making great plays,” Smith said. “I never thought about being an MVP.”

Smith, a seventh-round draft pick in 2011, wasn’t even the most famous player in his family before the 2013 playoffs started. Steve Smith became an All-America receiver at USC, and in Super Bowl XLII, Steve Smith caught five passes to help the New York Giants upset the New England Patriots 17-14.

When the Seahawks finished off the Denver Broncos 43-8 on Sunday, Steve and Malcolm became the seventh set of siblings to each win a Super Bowl.

“Man, it’s incredible,” Smith said. “It’s the way our defense is set up. We just run to the ball. I’m just so happy to be here, man. I’m just the one today. It happens all the time like this. It feels great.”

Smith wasn’t invited to the NFL combine in 2011. He was the 242nd player drafted, with his former USC head coach Pete Carroll taking a flier on a player diagnosed with achalasia, a rare disease that makes swallowing difficult.

Smith started eight games this season and played in 15.

In the past four games, Smith has had three interceptions, two returned for touchdowns and one to clinch the NFC Championship Game. Previously, he had only one career interception.

“I’m getting a lot more opportunities lately,” Smith said. “I’m just trying to make the most of them. The speed of the game and the way we attack, there’s just opportunities all over the field.”

Smith had a 37-yard interception return for a touchdown in the Week 17 victory over the St. Louis Rams. In the NFC Championship Game, he picked off Colin Kaepernick in the end zone on a pass intended for Michael Crabtree and tipped by teammate Richard Sherman to seal the Seahawks’ trip to New Jersey.

Then, in the second quarter Sunday, Cliff Avril hit Peyton Manning’s right arm and the pass wobbled to Smith, who broke to the ball faster than running back Knowshon Moreno. Smith went 69 yards to the end zone, giving the Seahawks a 22-0 lead.

“I guess we had good coverage on the back end,” Smith said. “Peyton kind of scanned the opposite side of the field and was working his way back. We had excellent pressure. [Avril] got his arm on the ball. I guess the ball came out high, and I was just fortunate that the running back was kind of sitting there waiting on it, and I just attacked it and took off.”

Smith’s postgame news conference was interrupted by a man who grabbed the microphone and said, “9/11 was perpetrated by our own government.”

Smith stopped and then quipped, “Somebody check his press pass.”

It was just something else that Smith never saw coming.