Manning Fails to Cement Legacy, and Doubts Will Linger 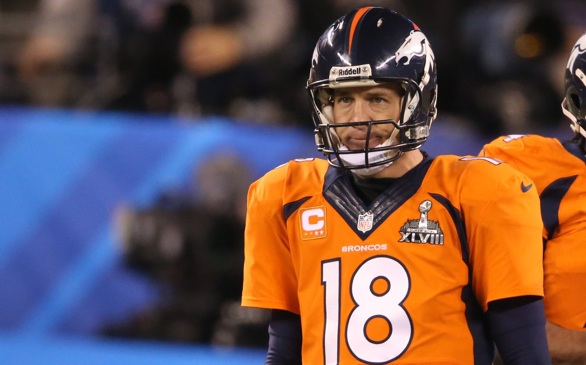 Peyton Manning of the Denver Broncos reacts after a play during the 2nd half during the Super Bowl.
(Credit: Lionel Hahn/Abaca Press/MCT)

EAST RUTHERFORD, N.J. — Before the Seattle Seahawks’ Super Bowl celebration had hit full, confetti-laden force at MetLife Stadium, a handful of Seattle defenders made sure to find Denver Broncos quarterback Peyton Manning and pay their respects as the final seconds ticked away.

“Peyton Manning,” said cornerback Richard Sherman, “may go down as one of the greatest to ever play the game.”

Sunday could have been the game that cemented Manning’s legacy, because what more was there to be done? The 37-year-old won his fifth MVP award by an overwhelming margin Saturday, giving him two more than anyone in NFL history. That came on the heels of an unprecedented regular season where he set league records in passing yards (5,477) and touchdowns (55).

Instead, the doubts will linger.

Was Sunday’s resounding 43-8 loss all on Manning? Not hardly, though three turnovers played a significant role. The defense allowed scoring drives on the Seahawks’ first three possessions and didn’t offer any impact plays. The special teams gave up a backbreaking kickoff return for a touchdown to start the second half.

Regardless, history will remember this as another big-game failure for Manning despite a Super Bowl record 34 completions. Such is the life of a quarterback, especially one in the “best ever” discussion.
Manning, who fell to 11-12 in playoff games, 1-2 in Super Bowls, conceded the usually unstoppable Broncos’ offense was ultimately no match for the Seahawks’ top-ranked defense.

“I think we played a great football team,” he said, also reiterating his stance that he’ll return next season. “We needed to play really well in order to win, and we just didn’t come to close to that. We weren’t sharp offensively from the very get-go.”

Denver’s first play was a tone-setter, as the offensive line couldn’t hear Manning’s calls, which led to center Manny Ramirez mistakenly snapping the ball beyond his quarterback for an eventual safety.

“For whatever reason, we couldn’t get much going after that,” Manning said. “Give Seattle a lot of credit. ... They caused a lot of our mistakes.”

And there were a lot.

Following a three-and-out on the next Broncos’ possession, Manning threw back-to-back interceptions — one returned by Malcolm Smith for a 69-yard touchdown. The next three drives went: turnover on downs, punt and a fumble by receiver Demaryius Thomas.

Manning, though, took offense when asked if the performance was embarrassing.

“It’s not embarrassing at all,” he said. “I’d never use that word. There are a lot of professional football players in that Denver locker room who put in a lot of hard work and effort into being here and playing in this game. The word ‘embarrassing’ is an insulting word, to tell you the truth.”

Broncos teammates, in turn, defended their quarterback. When asked if Manning should shoulder the blame for Sunday, tight end Julius Thomas said: “Absolutely not. In order to point the finger at Peyton Manning, you would be neglecting all the things he did this season to get us to this point. ... He is the reason we are here, he is our leader, and we are going to stand by him 100 percent.”

Receiver Wes Welker added: “He’s had his best year … at age 37. I wouldn’t say that he’s really slowing down. He’s going upward instead of downward.

Coach John Fox offered a simple message to Manning after the game, telling him he had “a great season, a record-breaking season, and he just came up a little short tonight.”

Again, some will say.

Perhaps it’s a fair criticism, perhaps not, but it’s one Manning will bear with just one Super Bowl title, even while his thought centered on the team.

“We worked hard to get to this point and overcame a lot of obstacles to be here, putting in a lot of hard work,” he said. “It’s a really good thing to have this opportunity, but certainly to finish this way is very disappointing.