The Naked and Famous Ready to Warm Hearts Valentine's Day: The band will be performing at the Forum in support of Imagine Dragons. 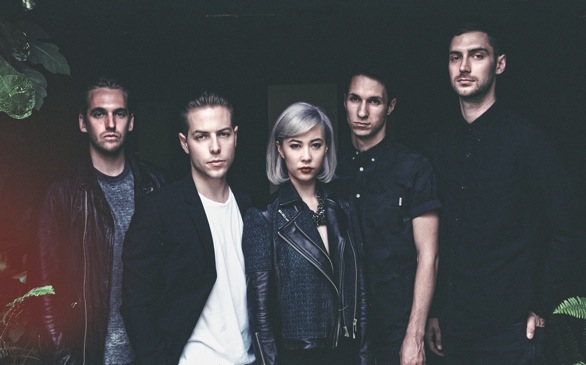 The New Zealand band will also be performing at Coachella.
(Credit: Courtesy of Big Hassle.)

Aside from the generic romantic comedy or ironic horror flick, it can be a little difficult for Angelenos to pin down a nighttime shenanigan on Valentine’s Day.

However, this year the newly revamped Forum has a special treat wrapped up in a big red bow: New Zealand’s own The Naked and Famous! The band will be performing Feb. 14, supporting Imagine Dragons.

We caught up with Aaron Short from The Naked and Famous and talked about what the band is looking forward to most on its U.S. run and stop in L.A., since coming through last year to support its newest album, In Rolling Waves.

Campus Circle: How's the Australian/New Zealand tour going so far?
Aaron Short: So great to be back doing Big Day Out again! Big Day Out sort of marks the beginning of our touring career back in 2011 when we started the tour cycle for Passive Me Aggressive You, so it feels cool now going full circle after such an intense three years of touring and writing a second record. It was also so nice to return home to New Zealand a couple of weeks prior to Big Day Out starting. A well overdue experience.

CC: What's the most exciting place you're looking forward to touring when you're back in America?
AS: The classic ‘Tour America in a Bus’ tour is always one of our favorites. We’ve done a fair few of them now, and it’s always a great time. I’m excited about some of the dates we have coming up soon, as there’s quite a few cities we haven’t done on past tours. Coachella is amongst it all too, which will be an experience.

CC: On tour, how do you guys spend your downtime (if any)?
AS: We all have our little rituals. Anything that allows the mind to rest and recover. Not ashamed to say when we tour, we really go all out. Generally three or four show days in a row before a day off, and even the day off sometimes turns into press. It gets full on. I’m a big fan of finding a nearby bit of nature of some sort to walk or run around, or finding a new experience local to the city I’m staying in. Either that or I’ll do the complete opposite: stay in bed all day with movies and some sort of greasy food.

CC: Are there any cities on tour that you're always excited to go back to, if not for the shows, for particular restaurants, food, friends/family in the area?
AS: That list is constantly growing larger every time we tour. That is part of the fun of revisiting places we’ve toured in the past. We continually meet new people along the way and discover new little favorite places to have a good time, and it’s always exciting knowing it’s all waiting for you upon your return.

CC: While you were here working on your second record, what was your favorite spot to get away from it all or have fun in Los Angeles?
AS: Well, the entire band settled down for a year in the same house in Laurel Canyon. It was a beautiful place and in quite an isolated area too. That is where the majority of the record came together, and it was really nice having that house as our little escape from the craziness that is L.A. Hiking and running around some of the beautiful canyon trails near us would definitely be one of the favorite "get away from it all" activities.

CC: From what I've heard, it took you only a month to record your new album! Did you guys already have a preconceived notion of the vibe and what to do when going into the studio? For example, I know you wanted to make sure that everything on the album could be played live, without any back-track assistance -- were there any other particular concerns you had for In Rolling Waves?
AS: When we step into the studio, we mean business! For this record, the recording studio wasn’t a creative place for writing. By the time we stepped through those doors, the demos had been finalized, the band had endlessy rehearsed the songs, and all the electronic production was pretty set in stone. When it was time to finally press record, we knew exactly what we were after and what the end result would be. Not to say there wasn’t a few surprises along the way, though.

CC: Seeing as you spent last year working on In Rolling Waves at Sunset Studios in Los Angeles as well as living here for a bit, did you have a chance to submerge yourself in L.A. sights and sounds while you were here?
AS: L.A. was what we considered home from the day we came off tour in April 2012, to the day we got back on the bus in September 2013. We absorbed (and ocassionally rejected) everything L.A. had to offer!

CC: What's your favorite song(s) you can't wait to perform and share with fans?
AS: We’re pretty set on playing new material right now, but we musn’t let excitement get the better of us! In Rolling Waves is still fairly fresh, and right now we’re all about finding the right balance between the new and the old, the singles and the more attention-demanding moments. We definitely get a little more carried away when it’s our own headline show of course, but festivals and support slots demand a different type of set.

CC: You did a small amount of touring in the States back in October. What should fans expect on this next leg of your American tour as opposed to the one in the fall?
AS: Well, the February tour will be in support of Imagine Dragons, which means we’ll be doing some pretty big arenas. Generally our show size is around the 2,000 person mark, so this will be very new territory for us too! We do have to keep things a little more concise on this run, though, so can’t go quite as crazy on the lighting and production and longer sets. There’s plenty more time for that, though.

CC: Anything else to share and reel new fans in to see your show in Los Angeles on Valentine's Day, beside it being the perfect date or anti-date (depending)?
AS: Ha! Didn’t realize. Sounds like someone already has their mind pretty set on that day!

Whether a big production or a smaller performance from this band, The Naked and Famous is always a great act to see live.

Doors open at 7 p.m. sharp at the Forum!