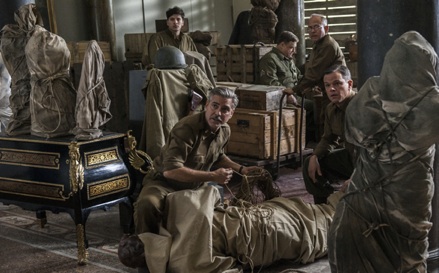 In high school, we learned the basics about World War II. We know all about Germany’s invasion of Poland, who were the Allies and what happened on D-Day.

However, most history books don’t teach you about a very important aspect of the war that involves preserving, saving and rescuing 1,000 years of civilization, art and culture. Thankfully, we have the film The Monuments Men.

“The story is so fascinating and as they say, untold,” said cast member Bill Murray during a recent press conference. “Most people don’t know this story.”

The film, directed by George Clooney, is based on the true story of the “greatest treasure hunt in history,” where seven over-the-hill, out-of-shape museum curators, artists, architects and historians join the U.S. forces and race against time to stop the German Nazis from stealing and destroying thousands of European paintings, statues and architecture.

The cast is a lively, fun bunch of actors that audiences never get tired of seeing. Clooney, Murray, Matt Damon, John Goodman, Jean Dujardin, Bob Balaban, Hugh Bonneville and Cate Blanchett all star in this film that is quite amusing.

“We wanted to make an entertaining film,” said Clooney. “We wanted it to be accessible.”

The seven Monuments Men in the film have an easygoing banter, cracking jokes and turning dangerous situations into humorous ones. For example, when Damon’s character accidentally steps on an unexploded mine, the dialogue between him, Clooney and Murray is surprisingly hilarious.

However, as funny as The Monuments Men is, the story’s serious undertone never goes unnoticed. It’s a war movie after all -- people die and in this case, so does their art. As the film points out, when a person’s art is destroyed, their history and culture disappear along with it. During this time, Jewish people were especially in danger of losing everything.

“A lot of the art that was destroyed was painted and created by Jews. A lot of that is gone because that…was what Hitler was trying to get rid of,” said co-producer Grant Heslov.

Adolf Hitler’s plan was to create a massive museum filled with the Madonna and other works done by painter Johannes Vermeer, Leonardo Da Vinci and countless others. Thanks to the Monuments Men, a lot of the stolen art was discovered and returned to the rightful owners, but there are pieces of art still missing to this day. With The Monuments Men releasing Friday, Feb. 7, the film’s team hopes this will raise some awareness.

“We did talk about the idea, hoping that this would shed light – this would open more discussions,” said Heslov.

In 2012, 1,400 works of art was found in Cornelius Gurlitt’s Munich apartment, much of which was stolen by Nazis. “…This art that was found in Germany recently – about a billion and a half dollars worth of art – some of that art was actually art that was found by the Monuments Men and given back to the people who were supposed to give it back to their original owners. And they didn’t – the guy kept it,” said Clooney. “If [The Monuments Men] opens up a discussion a little bit, that’s really helpful.”

Raising awareness about this ongoing issue is just the beginning, however. As Clooney pointed out, it’s a long and ongoing process to find these stolen pieces of art. “There’s a lot of this art that hasn’t been found that’s in other people’s homes or museums, quite honestly,” he said. “It’s a long process, and it’s not particularly easy…It’s understanding how important this culture is to each of these countries and trying to find a way to get them back.”

We have no way of knowing whether or not all of the stolen art during WWII will be found and returned to the rightful owners. Nevertheless, The Monuments Men seems to be a step in the right direction, reminding us about the importance of saving art during times of war. After all, if we end up destroying art, destroying culture, destroying history -- what are we really fighting for?