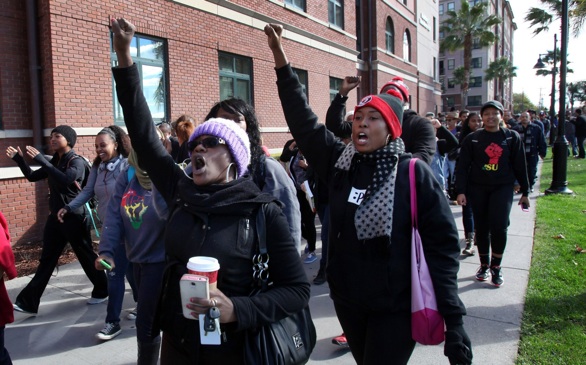 SAN JOSE -- In the first examination of San Jose State's handling of a racially charged bullying case, an independent investigator Monday found the university did "everything it could" and was quick to alert police when it learned a group of white students had been reportedly tormenting a black roommate for weeks.

The findings come after weeks of questions about how the university could have missed signs of the abuse, including claims the roommates called him racist names, fastened a bicycle lock around his neck and barricaded him in his room.

Residence hall staff did not know about the bullying for weeks, in part because of the victim's desire to keep it private, reported Myron "Mike" D. Moye, a prominent San Francisco lawyer who led the investigation.

But once dorm staff members realized the extent of the problem, they immediately transferred two of the students and filed a report on the victim's behalf with campus police. Four of the roommates have since been suspended and charged with misdemeanor battery and hate crime charges.

The university did "everything it could, under the circumstances as presented here," Moye, who is African-American, said in a Monday news conference.

The campus administration has been intensely criticized for the case since November, with students saying they had complained for years that SJSU is not welcoming and tolerant for its diverse student body -- and that it waited for a crisis to respond.

On Monday, some students expressed disappointment with the report, saying it focused too much on the victim's silence and not enough on university policy or educational initiatives.

Gary Daniels, co-founder of the Black Unity Group, a coalition of campus black student groups, said he disliked how the report shifted blame from the university with its "hostile campus environment for African-American students with a notable lack of resources for underrepresented minorities on campus."

Another student activist said she did not trust the report. "We called that back in December," said Ashlei McPherson. "They were going to get the answers they wanted because of the questions they asked."

But Moye's report is not the final word. His findings, focused on how the university handled the incident, will inform a broad set of recommendations by a new task force on San Jose State's campus climate, led by LaDoris H. Cordell, a prominent civil rights advocate and retired African-American judge.

The task force will meet publicly -- beginning Thursday evening -- and will also convene public hearings. "I hope that as a result, there will be trust in the recommendations that we make," Cordell said.

SJSU President Mo Qayoumi said he needed to more thoroughly review the report, and its attached documents, before commenting on its findings. He did say he wants to be informed about serious campus incidents "in a more timely fashion."

The report noted that Qayoumi was in the dark about the details of the investigation for about a month, until Nov. 20 -- just before the district attorney charged the students.

On Oct. 13, the university's resident assistants first discovered the problems when the victim's parents complained about a Confederate flag displayed in the suite's common area and a racial slur written on a whiteboard. The next day, they learned of other incidents going back to the beginning of the semester, Moye's report found.

The previous week, on Oct. 8, a resident assistant had asked two of the students to remove the flag from their bedroom -- it hung over a window, visible from the outside, and students had complained. But that resident assistant did not realize an African-American student lived in the suite or that bullying might be taking place, the report found. That staffer was from another floor and didn't know the students, Moye said.

Some students who knew about the abuse encouraged the victim to seek help, the report says, but the young man had insisted "on keeping the matter private" and urged them not to report it either.

When San Jose State staffers did talk to the black student, he "did not offer any signals of the problems he was experiencing," according to Moye's report.

By highlighting his reluctance to come forward, the report comes very close to "blaming the victim," one faculty member said.

"When you are 18, ... away at college for the first time and trying to understand your identity as a person of color, it is very likely he had no idea how to deal with that kind of racism, psychological and emotional abuse," said Russell Arias, who teaches The Psychology of Prejudice. "A lot of kids that age ... might not know who to trust or how to reach out for help and how to talk about such things with strangers."

After the bullying came to light, Moye concluded, the school acted immediately, set off campus police and student conduct probes, moved the harassment suspects away from the victim, and enforced interim suspensions when the investigations were completed.

Moye said it was challenging to determine whether the university had overlooked signs of a problem. "There wasn't a situation where a (resident assistant) or someone from the staff walked by these things and did nothing," he said.