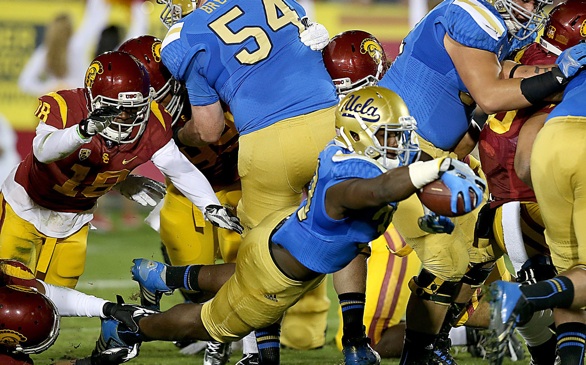 Adrian Klemm knows how the other half lives. The University of California-Los Angeles offensive line coach returned from a recruiting trip in December, only to find he was the one being wooed.

University of Southern California coach Steve Sarkisian had called to make Klemm an offer few could refuse, one that all but included the deed to the McKay Center.

But UCLA coach Jim Mora was on his way to the airport to greet Klemm carrying his own offer, one unprecedented for a Bruins assistant coach.

Klemm, selected the Pac-12 Conference’s recruiter of the year in 2012 by the recruiting websites Sports 24/7 and Scout.com, stayed with UCLA, accepting an offer believed to be about $700,000 annually. That’s more than what Karl Dorrell was paid to be UCLA’s head coach in 2003.

The value UCLA and USC placed on Klemm underscored a big difference between priorities for a college football program compared with the NFL: A college coaching staff has to do more than teach Xs and O’s.

“Recruiting is our lifeblood,” Sarkisian said.

He and Mora had different agendas regarding their staffs this off-season.

Mora had to retain a group of coaches who in two seasons have considerably improved the Bruins’ standing in the Pac-12. Sarkisian, whom USC hired away from Washington in December, sought to build a staff that could push the Trojans back to the top of the conference.

Both staffs had to be in place and operating at high efficiency long before the national signing period, which begins Wednesday.

Mora said he looked for “integrity and high achievers” in assembling his staff. He also sought a smorgasbord of personalities to motivate players, saying, “some guys are screamers, some guys pat players on the butt.”

Necessary in the DNA was something Mora never had to deal with in the NFL: recruiting. “You’ve got to be a good football coach, but you also have to have good players to coach,” Mora said.

The ability to recruit made Klemm and defensive backs coach Demetrice Martin particularly valuable to the Bruins.

“Both those guys have huge, huge potential,” Mora said. “One day, they are both going to be outstanding head coaches.”

Klemm has been in demand. USC came after him a year ago, and increased its efforts in December. Part of the reason is that he has a knack for attracting high school talent.

“You have to be genuine,” Klemm said. “There are so many recruiting websites; they can find out what you’re telling everyone else with a click of a mouse.

“Twenty years ago, a coach could tell 20 kids they were his No. 1 recruit,” he added. “You can’t do that. You have to be honest with kids. They appreciate that more than getting hustled.”

There are 15 high school players who have indicated they will sign with UCLA this week. Three others, defensive backs Mossi Johnson and Ron Robinson, and linebacker Zach Whitley, graduated early and enrolled in December.

Assembling a stellar recruiting class is not achieved in one off-season.

“The most important thing is getting on kids early, when they are freshmen,” Klemm said. “You have to evaluate talent and project. There is a maturation process. You want to establish a relationship so when the light clicks on and other teams come in you are entrenched in the kid’s environment.”

Sometimes, Klemm said, that means just being a friend.

“You have to have the kid’s best interest at heart,” Klemm said. “They’ll listen to you and trust you.”

That leaves USC with 14 scholarships to be filled on signing day, and 11 high school players have orally committed.

Sarkisian, who cut his teeth as a recruiter as a USC assistant on former coach Pete Carroll’s staff, said the ability for an assistant to recruit is “as important as it is to be a great coach.” He spent December putting together a staff with those needs in mind.

“On your staff you have to find a balance,” he said. “Everyone has different styles, whether on the phone or in person.”

Sarkisian said the ability to relate with players from all family situations was important.

“I don’t want just a bunch of brash recruiters running out on the road,” he said. “You’re trying to find the balance … the coach who can sit down with a two-parent home for a three-hour meal.”

If there is a downside to being a top recruiter, it’s that it can sometimes cause your coaching prowess to be forgotten. Klemm and Martin have lived with that.

“Unfortunately, they are categorized as recruiters,” Mora said. “That completely overlooks what their positions have done on the field the last two years.”

UCLA went without an offensive lineman drafted by the NFL from 1999 to 2011. Guard Jeff Baca was drafted in the sixth round by the Minnesota Vikings last year, and guard Xavier Su’a-Filo is expected to go within the first three rounds this spring. Klemm also had a player chosen as a freshman All-American each of the last two seasons, center Jake Brendel in 2012 and guard Alex Redmond last season.

The Bruins lost their entire starting secondary after the 2012 season, but Martin developed a group of newcomers into one of the Pac-12’s best last season.

“Yeah, it can get a little frustrating,” Klemm said. “But I don’t need the attention. I want to get players who make me look like a better coach, and then I want to make them more talented.”

(Gary Klein of the Los Angeles Times contributed to this report.)