NCAA Won't Impose Sanctions that Could Have Affected USC's Sarkisian 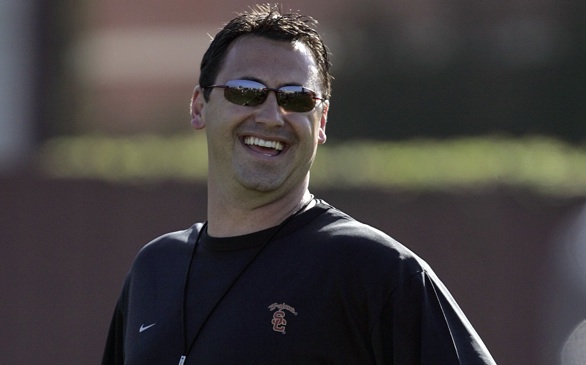 Steve Sarkisian, seen here in March 25, 2008 when he was assistant head coach of the Trojans.
(Credit: Alex Gallardo/Los Angeles Times/MCT)

The NCAA has informed the University of Washington that it has completed an inquiry and does not plan to take action stemming from allegations that a former assistant football coach who worked under Steve Sarkisian paid for private tutoring and online classes for a recruit.

The NCAA investigated allegations that former defensive line coach Tosh Lupoi gave $4,500 to a former high school track coach to pay for academic services for Andrew Basham, who signed with Washington in February 2013 but did not qualify academically to enroll.

"Based on a review of the information available, the enforcement staff does not believe that further action is warranted," Tom Hasty, the NCAA's director of enforcement, wrote in a letter dated Monday to Washington President Michael Young.

The letter also said, "However, if additional information is developed, the staff reserves the right to look further into these matters."

Lupoi has denied that he violated NCAA rules in the recruitment of Basham. Lupoi was regarded as a possible candidate to join Sarkisian's USC staff, but the school backed off when the allegations regarding Basham's recruitment surfaced. Sarkisian last month hired Chris Wilson as defensive line coach.

Efforts to reach Lupoi on Monday were not successful. Lupoi was not retained by new Washington Coach Chris Petersen. Lupoi and Washington agreed to a mutual separation agreement last month.

Davis said Lupoi gave him $3,000 in cash to pay for private tutoring for Basham. He said that Lupoi also gave him $1,500 in cash that was delivered to Basham's father, Ron, to reimburse him for payment for online classes that had been charged to a credit card.

After speaking with The Times, Davis called the NCAA and reported his involvement.

Davis, his wife, Heidi, and Heidi's daughter, Brooke, subsequently met with NCAA investigators. He said NCAA officials assured him that Basham would not be penalized if he cooperated with the investigation. But Davis said Andrew Basham declined to speak to the NCAA.

"Me and my family are proud that we told the truth," Davis said Monday. "We're disappointed how it's turned out, but it's not closed yet."

Ron Basham said Monday that he met with NCAA investigators about two weeks ago.

"I have no idea if Mike Davis ever got any money, but I never received any money from anybody," Ron Basham said.

Had the NCAA found that violations occurred, Sarkisian could have faced penalties, including suspension.

"You come to work every day with a mindset that you're going to do things the right way," Sarkisian said, "and I really felt like we did that at the University of Washington and we'll continue to do that at USC."