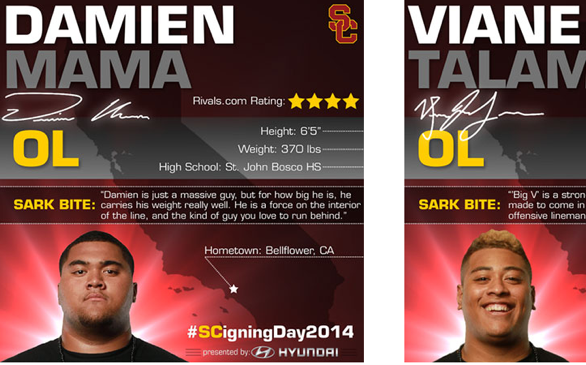 It's National Signing Day - a big day for college football, especially for the programs at USC and UCLA!

Both colleges have nabbed great high school players so far, but here are four that stand out to us:

Damien Mama
•    From: St. John Bosco High
•    Position: Offensive Lineman
•    Height/Weight: 6-5/360 pounds (one of the most physically imposing linemen in this class).
•    Ranks: Five or four-star recruit, No. 38-ranked prospect in the country, No. 5 recruit in the state of California (247Sports' composite rankings), No. 67 on the ESPN top 300 high school players list, and No.1 offensive guard in the nation by several recruiting services.
•    What they're saying: “Damien is just a massive guy, but for how big he is, he carries his weight really well. He is a force on the interior of the line, and the kind of guy you love to run behind,” according to one USC coach.

Bryce Dixon
•    From: St. Bonaventure
•    Position: Tight End
•    Height/Weight: 6-4/210 pounds
•    Ranks: Four stars, No.1 tight end of the nation, No. 89 on the ESPN top 300 high school players list
•    What they're saying: "Possesses very good overall ball skills with the ability to consistently extend for it before it gets into his pads. A confident, aggressive pass catcher with good concentration. Goes over the middle and can catch the ball in traffic." -- According to ESPN.com's scouting department

For up-to-date news on the USC football recruits, visit usctrojans.com.

Adarius Pickett
•    Position: Cornerback
•    From: El Cerrito (Calif.) High
•    Height/Weight: 6-0/185 pounds
•    Ranks: Four stars, ranked 184th on the ESPN top 300 high school players list
•    What they’re saying: “This might not be the fastest or most fluid perimeter defender, but he has enough savvy, strength and recovery quickness to play on an island and make plays.” -- ESPN.com

Kenny Young
•    Position: Linebacker
•    From: John Curtis Christian High
•    Height/Weigth: 3-2/225 pounds
•    Ranks: Four stars, seventh best middle linebacker in class, Rivals' 95th best player overall and No. 5 outside linebacker.
•    What they’re saying: "He loves contact and he is a strong tackler with some thump behind his hits. He is more of a vertical linebacker that can blitz and accelerate to the ball. Moving in space and dropping into coverage are not strengths.” -- Scout.com via Dailynews.com