Magic Johnson and Other Dodgers Owners Purchase the Sparks 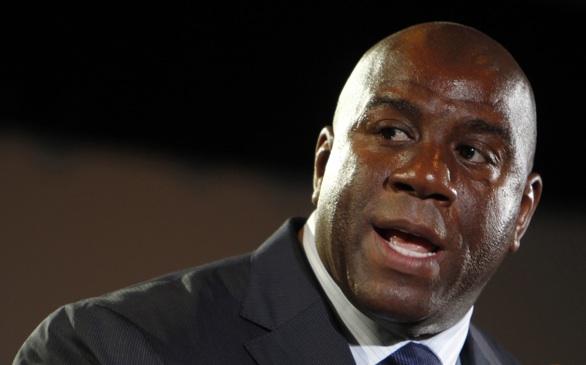 Todd Boehly and Bobby Patton, other members of the group that paid a record $2.15 billion for the Dodgers in March 2012, are also in on the Sparks purchase. The only Dodgers owner who is not is Peter Guber, who owns a stake in the NBA’s Golden State Warriors.

The WNBA had no comment about the Sparks purchase, which was confirmed to The Times by a person with knowledge of the situation. That person did not wish to be identified because the sale had not been officially announced.

The WNBA and an L.A.-based public relations firm both sent out news releases about a “major announcement” coming Wednesday morning involving Johnson and the WNBA.

The WNBA has been seeking new ownership for the Sparks since the team's chairwoman, Paula Madison, told the league in December that her family-owned company could no longer afford to invest in the team.

Madison said that since her family firm, Williams Group Holdings, began investing in the Sparks in 2007, the company had lost nearly $12 million on the team and was projected to lose more than $1 million in the 2014 season.

WNBA President Laurel Richie said in January that several parties had expressed interest in taking over the Sparks. The Warriors' ownership group later acknowledged that it was in talks with the league about potentially moving the team to the Bay Area.

The Sparks have been in Los Angeles since the league's inception in 1997.

The Sparks are one of six privately owned teams in the WNBA; the other six teams are owned by the NBA. The late Lakers owner Jerry Buss sold the Sparks for $10 million in 2006 to an investment group led by Kathy Goodman, a former film executive, and attorney Carla Christofferson. Williams Group Holdings became the primary investor in the team the following year.

The Sparks purchase is not the first effort by Walter and Boehly to expand Guggenheim’s sports holdings beyond baseball. The Guggenheim executives have acknowledged talks with the NFL about a possible football stadium in the Dodger Stadium parking lot.

Guggenheim also was one of the bidders for AEG Live, which Phil Anschutz put up for sale in 2012 and then took off the market last March. The AEG live portfolio includes all or part of the Kings, Lakers, Galaxy, Staples Center and StubHub Center.