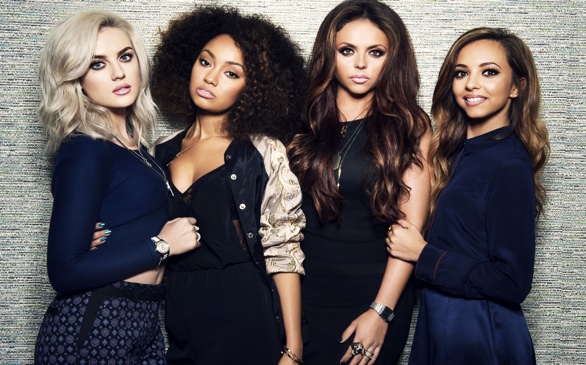 Hailing from across the Atlantic is global British girl group Little Mix. The four-piece got its start on the U.K. version of “The X Factor,” where they became the first group to ever win the singing competition show.

Since then, the group released its debut album DNA, making history again as the first ever British girl group to debut in the top five with its first album. Recently, the ladies released their second album, Salute, and are supporting Demi Lovato on her The Neon Lights Tour, along with Fifth Harmony.

Campus Circle caught up with Little Mix member Perrie Edwards during a whirlwind of press interviews and appearances.

Campus Circle: What was the inspiration behind the group’s newest album, Salute?
Perrie Edwards: We wanted the new album to be a bit more mature with a bit more honesty, and we worked harder than ever on this new album.

CC: What is your favorite song on the album?
PE: It is hard to choose just one, but I like performing the song “Salute” because it has cool choreography, and I feel so fierce.

CC: Who are your biggest singing inspirations?
PE: My biggest inspirations are Steve Perry from Journey, Christina Aguilera, Mariah Carey and Whitney Houston. When I was 10 years old, I would try to hit their notes in my bedroom.

CC: What are you guys looking forward to most in 2014 in terms of your music career?
PE: We hope that the album does well, and we hope that the tour with Demi Lovato goes well. Following all of that, we also have our very own Salute tour.

CC: How do you prepare before taking the stage in front of thousands of screaming fans?
PE: We just hope that we can go on stage. We love it when the crowd goes wild -- and the crazier, the better.

CC: Are you excited to be touring with Demi Lovato?
PE: We love Demi. We have met her a few times. We think she is lovely, so hopefully we get to hang out with her while we are on tour.

CC: What advice would you give to aspiring singers/songwriters?
PE: Never give up and keep trying. Don’t let anyone tell you that you can’t do it. Nothing is given to you in this world -- you have to work for it.

CC: What would you like to say to the fans of Little Mix?
PE: Thank you for being the best fans in the world and supporting us through our journey. Stay beautiful; we love you a lot.

The delux version of Salute is out now. Little Mix will be opening for Demi Lovato on Feb. 13, 2014 at the Honda Center in Anaheim.