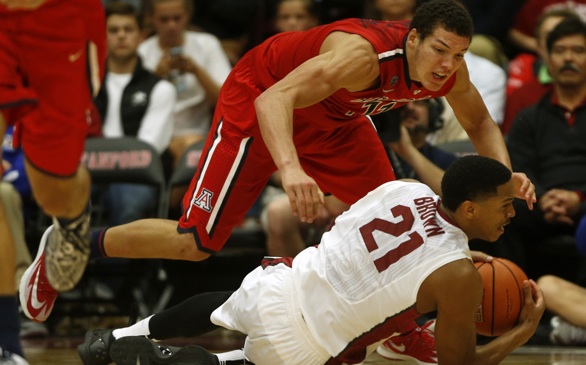 So you’re still picking green and blue confetti out of your hair. You’re about to name your new Labrador retriever “Malcolm.” When spring arrives, you’ll be carving a “12“ into your hedges.

You might have been too busy with a certain NFL team to realize that half the Pac-12 basketball season has flown by (that’s OK, Oregon missed January, too).

We’re here to help, with the Cliff’s Notes on what’s taken place:

Arizona is all the rage. The Wildcats aren’t much to look at on offense, but they guard like it’s a home invasion.

’Zona has a two-game lead, even after Justin Cobbs of California ruined its unbeaten season the other night. But the refs still aren’t doing ’Cats coach Sean Miller any favors. Richard Solomon’s pick that freed up Cobbs was so illegal, he almost strained an oblique setting it.

Awhile back, Arizona held Washington State to 25 points. With three minutes left, the Cougars had 17. Some people thought Dick Bennett was coaching them again.

There are five teams knotted at 5-4 for fourth place, and I don’t know if any of them are going to make the NCAA tournament. Stanford is too fragile, Oregon State too flighty, Arizona State is 3-6 against the RPI top 100, Colorado too banged up, and Washington, well, the Huskies have continued a growing tradition of not starting the season until after the holidays.

They might as well not turn on the lights at Hec Ed until January. Give the Huskies slack for some early, costly injuries, but here’s the three-year, regular-season record out of the league against the RPI top 100: 2-11.

Still, Washington could be in a three-way tie for second, if it hadn’t lost to the Cougars the other day, when WSU put a 22-3 run on UW midway through the second half. I wouldn’t have thought the Cougars capable of a 22-3 run against Whitman.

Oregon began the New Year undefeated, and now it’s got six losses. No problem; Dana Altman will just go to the waiver wire for the second half instead of waiting for the offseason.

The Ducks tried to divert attention from the floor by staging Phil Knight Bobblehead Night against USC. Wonder if those were made by kids in Southeast Asia?

Mike Montgomery, the Cal coach, is still outfoxing just about everybody he faces. He passed Slats Gill for No. 3 on the league’s all-time win list. Of course, he’s also in the top 10 for dry wit.

Sunday is the new Saturday in the Pac-12. Recently, they played five games on a Sunday. The league would play a game on the Arctic ice cap at 3 a.m. on a Tuesday if TV would pay for it.

Remember how Andy Enfield was the hottest thing last March at Florida Gulf Coast? He’s gone from Dunk City to Funk City at USC, where the Trojans are 1-8 and last in the league.

Two weird stats around Enfield: Since Pac-12 play began, officials have whistled six technical fouls around the conference, and four of them have been on USC, three on players.

And this: There have been six Pac-12 coaches teleconferences this season, and in three of them, nobody could come up with a single question for Enfield. Only Clayton Kershaw has pitched more shutouts in L.A.

So that’s pretty much it. Now back to your primary passion. Free agency is just around the corner, not only for Altman but in the NFL.

• According to the league office, the new rules limiting defense have bumped scoring to 70.5 points per game per team (up 2.7 in league, and 5.3 in all games). Fouls are up by more than two a game per team, and shooting has improved to .439 from .431.

• In 33 of 35 Pac-12/10 seasons, the team leading at the midway point has won or tied for the title. But one of the exceptions was last year, when UCLA won after Oregon and Arizona led at the turn.

• It’s a season of unprecedented foul shooting in the Pac-12, with four teams over 74 percent, led by Oregon’s impeccable .782.