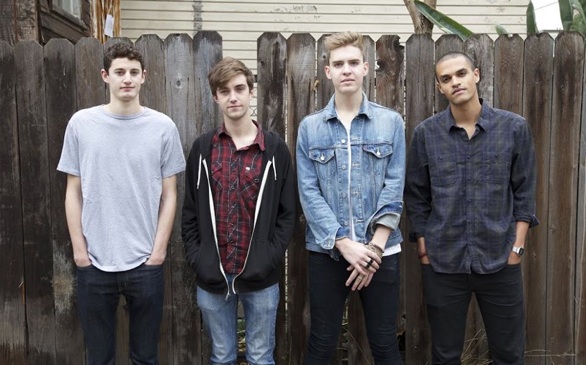 Fate threw James Brownstein, Aman Alem and Luke Schunk together in a band during their first week of classes in the Popular Music program at USC. Upon the realization that they actually enjoyed each other’s company as well as playing with one another, they decided to put together a more formal, non-school related band.

Drawing in the talented Nick Chuba from the Studio Jazz Guitar program, these four gentleman have come to form the band that many of us here at 'SC have grown to know and love: House Fire.

Inspiration strikes in many forms, but bands that influence House Fire’s sound include Radiohead, Kings of Leon and Phoenix. Their own sound may be hard to classify, walking the line between alternative rock and indie vibes, but it's easy to check it out for yourself with their newest EP released this fall, Days End.

Most recently, the band has been performing shows at our beloved stomping grounds, Traddies (Tommy's Place). In the future, however, House Fire looks to play around the L.A. area. Though it will be sad to see them move up from our infamous below-ground bar, watching them open for Moving Units on March 28 at the Roxy will be a long-awaited triumph for this fantastic foursome.

Lead singer Alem celebrates these successes. He shared his thoughts on cherishing all of House Fire’s accomplishments and their post-grad path:

“I do have dreams for us and myself... I dream that the first time I go to Coachella will be as the front-man of House Fire. I dream that we will one day play to big, sold-out stadiums and that we’ll play to small crowds who know every word to every song. But mostly, I dream that we might write music that truly affects people on a personal level, and as far as I know, this one has come true. And the best thing about this last dream is that it can keep coming true. Every time someone tells me they enjoyed a show or really loved this one song, I feel as though I’m living out a dream. I truly believe in House Fire, and I think we’ll go places (whatever that means). But even if we don’t, I’ll be happy with the fact that we made a bunch of people yell and scream and mosh last year at a packed pink house party. I’m all about that.”

Come yell and scream with your fellow Trojans at their show on March 28, and check out their EP, Days End.