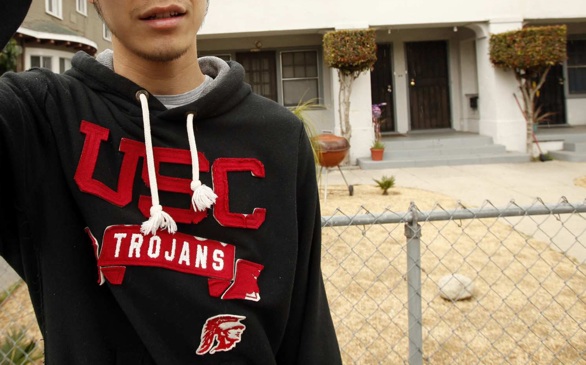 The parents of two slain USC graduate students from China called on the university Thursday to pay restitution and help their families set up a scholarship in the victims' names.

It was their first statement to local media since Bryan Barnes, 21, pleaded guilty Wednesday to shooting 23-year-old engineering students Ying Wu and Ming Qu as they sat in a parked BMW about a mile west of the campus.

Xiyong Wu, a police officer, and Wanzhi Qu, an insurance salesman, flew in from China to speak at the hearing, where they demanded the death penalty for the defendants. Barnes received two consecutive life sentences; his co-defendant, 21-year-old Javier Bolden, is awaiting trial. By Thursday, the families had begun to accept the outcome of Barnes' trial, said their volunteer legal advisor, Daniel Deng.

Addressing the media at Deng's Rosemead office, Wanzhi Qu's voice never wavered as he read from a prepared statement, though his notes shook visibly in his hands.

"Fathers always wish for the best for their children. But our children will never return. Our dreams will never come back," Wanzhi Qu said in Chinese.

The families have asked USC to refund $200,000 in tuition paid by both students. They also asked for the $200,000 in rewards that USC and Los Angeles officials offered in exchange for information during the investigation last year.

Deng said the money would serve as restitution and seed money for a scholarship for high school students in China.

USC had initially offered to pay back the students' tuition and other fees, but the parents did not take the money. They filed a civil suit against the university that was later dismissed. Even if USC doesn't pay, the families do not intend to pursue civil action at this time, Deng said.

USC spokesman Carl Guido Marziali said the university does not plan to renew its offer to return the tuitions to the families. The university released a statement Thursday saying that the USC community "continues to mourn" the deaths.

The 2012 killings rocked the Southland's Chinese community and brought relentless attention from many China-based news outlets, which have covered every twist in the case. At one point, Meinan Yin, Wu's mother, broke down during a reporter's question. She and Xiyong Wu hugged each other and wiped away each other's tears.

"We are in pain, but we are grateful for your support," Xiyong Wu said.