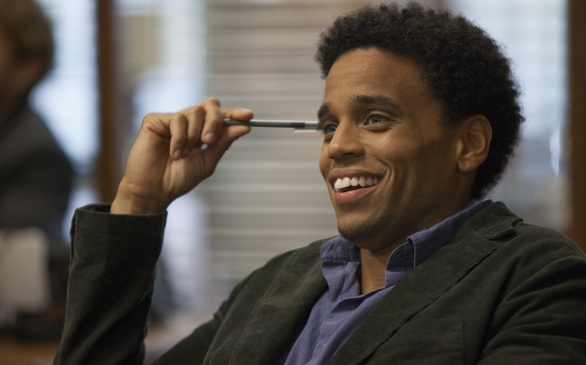 Can a one-night stand turn into a meaningful, long-term relationship? That’s the million-dollar question in the new film About Last Night.

Ealy (also known for “Almost Human” and Think Like a Man) plays Danny, a nice guy who doesn't exactly knows what he wants out of his relationship with Debbie (Bryant).

Sitting down with Campus Circle, Ealy discussed sex, relationships and his new role.

CC: In the film, Danny and Debbie experience something very common in relationships: the passion dies down and things become a little dry. How can a couple keep or bring the fire back into a relationship?
ME: Both people have to really want to make it work. That’s just across the board; both people have to really put in the work to make it exciting. And that’s just a simple desire to not be boring and make it fresh, to continually try to surprise this person. That’s easier said than done, and I think it takes two.

As far as Danny and Debbie are concerned, I think Debbie never really changed. Debbie’s not the problem; she knows what she wants, says what she wants, and it’s Danny who is trying to gloss over the real conversations just to avoid a fight. If you keep running from the truth, eventually it will hit, and I think that’s what happens between Danny and Debbie; he keeps running from the truth. Being charming and sweet and saying “I just want to move in” --- all of that, after a certain point, you can’t run anymore. When he starts having problems with his job, he can’t keep running.

CC: So, what does a woman do in that situation where she sees her man going through all of that – losing his job and glossing over issues? Does she just let him go?
ME: That’s a tough one. And it could go the opposite way. Every scenario is probably a little bit different so it’s hard to say it as a general rule, but some things you’ve got to live and learn. Whether you let him go now or you let him go later, you probably will let him go if that’s a problem in your relationship. He or she cannot effectively communicate what’s bothering them, and so they choose to ignore what’s really going on…at a certain point, you just can’t be in a relationship like that. People have to be willing to communicate and compromise.

CC: Communication is key.
ME: Let me tell you, it is so important!

CC: One of the things that made About Last Night feel really modern was the integration of technology into relationships – texting, Facebook, etc. How do you feel social media/texting has played a part in relationships today? Does it hurt relationships or help them flourish?
ME: I think there was a period where it hurt relationships, and I think that period is gradually passing because now people couldn’t imagine being in a relationship without social media on a couple of fronts. One: Social media has now made it so that (I hate to say this) you have to be careful if you’re cheating because you don’t know who’s talking to who on whose Facebook, and blah, blah, blah. So, obviously, it’s made things a little more difficult as far as cheating is concerned, so some people would say that it’s a good thing.

But in terms of...relationships, I find that you can send a text or you can pick up a phone. I think if you really want to be with somebody, the more you communicate in person (either over the phone or in person) with a live voice as opposed to emailing and texting, there’s less room for misinterpretation. And misinterpretation leads to miscommunication, and I think technology has really been a key factor in a lot of that…To me, it’s created -- we’re kind of a bunch of cowards. We’re afraid to communicate openly with each other. We tend to write how we feel as oppose to speak how we feel.

CC: Valentine’s Day is coming up, and About Last Night releases on that day. What was your first real, romantic Valentine’s Day like?
ME: Um…I don’t know. I genuinely don’t. (laughs) I’ve got be honest with you, I genuinely don’t. I didn’t celebrate it for a long time, and I never really been – I’m kind of like Danny in that way. This idea of “organized love”… I’ve never been a fan of that. It doesn’t mean I don’t participate; it just means I’m not very enthusiastic about Valentine’s Day. I believe the most effective way to show how you feel about somebody is to not wait until that day, but do it on the most random day when they wouldn’t even think it was going to happen...Or, how about being there when they really need you the most? That’s as sweet as you can be.