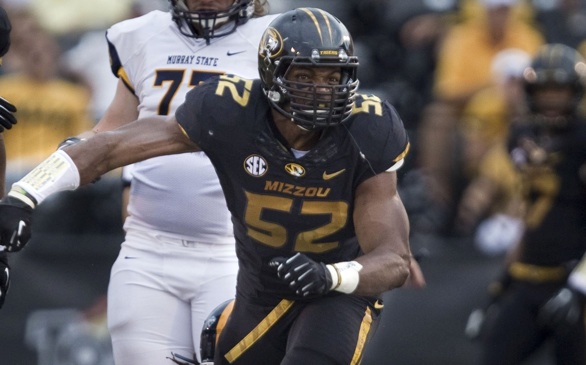 Michael Sam is now more than just a football player, more than a college student, more than a two-star recruit from a small town in Texas who grew into the SEC defensive player of the year at Missouri.

Sam’s sexuality has been something like an open secret for months. He came out to his teammates before last season started. Many of his friends and peers at Mizzou knew. Several local media outlets, including The Star, knew about this and honored his right to decide when and if to talk about it publicly.

If you Googled his name recently, “Michael Sam gay” was among the first suggestions. It was secret only in the sense that he was relatively famous, and this part of his life story had not been told publicly. His teammates and coaches supported him, and there is no evidence that anyone at Mizzou discouraged him from speaking out.

That’s progress. Major progress — even if major men’s team sports are still shamefully behind on a major civil-rights issue of our time, and even if part of his motivation was to control the message before it leaked out during the run-up to the NFL draft in May.

Sam’s announcement is courageous, historically important, and cause for celebration. He is a hero to many in our country, gay or straight, for speaking out when he has so much to lose. It’s one thing for Jason Collins to come out at the back end of a journeyman NBA career. It’s quite another for Sam, who is just now starting a career in the .

Sam’s announcement is only the beginning, though.

The critical part is what’s next.

and even (who has an openly gay brother) showed immediate support for Sam, but there will never be an easier time to support him. A news cycle or two from now, the loudest support will have quieted and Sam will be left to pursue his career and then we’ll begin to see what kind of world he is actually going into.

He should expect prejudice and ignorance.

Almost as soon as Sam went public, Sports Illustrated posted quoting NFL executives (speaking anonymously, of course) saying that he will drop significantly in the draft. One of them said, among other things, that football is “still a man’s-man game.”

The NFL has been preparing for this moment for years, rumors churning the last few offseasons of a player or players ready to come out of the closet. Commissioner Roger Goodell has used his “not just tolerance, but acceptance” line in many speeches and in many places.

That accepting an openly gay player in the meathead culture of professional football is now the proper public play is a sign of progress.

But what Sam will experience behind closed doors, and often behind his back, is an entirely different sign.

For instance, you might’ve noticed that Collins was not on an NBA roster after announcing he was gay last summer.

Publicly, the most socially accepted response to Sam’s announcement is open arms. A prominent Mizzou fan group on Twitter, but this was a day after .

Assuming SI’s sources are correct, Sam will lose a small fortune by dropping in the draft because of this announcement. After he’s selected, the general manager and coach of his team will say all the right things in front of the TV cameras. They’ll talk about how they looked at Sam as a football player first, and that the NFL is a meritocracy in which he will be respected or rejected based on his playing ability.

And, no doubt, Sam will find some accepting teammates. Some of them will stand in front of their lockers when the reporters come by and say they look at Sam as a brother, a teammate, no different than anyone else.

But what happens when those reporters leave?

This is the NFL world where a successful punter believes he was fired for publicly supporting gay marriage.

So this is where Sam will face barriers bigger than the ones that kept him from making this announcement sooner. This is where Sam will do his most important pioneering, where he will have the chance to change minds from the inside of professional football, so that someday football players won’t have to bother announcing whether they are gay or straight for the same reason they don’t bother announcing whether they drive a car or pickup.

Entering the professional football world openly gay is one thing. Succeeding inside of it openly gay will be quite another challenge.

Nearly 70 years after Jackie Robinson integrated major-league baseball, professional sports should be further along than this. Sam shouldn’t have to be in this position, not in 2014.

What he and the football world around him do with this opportunity will be a mark of progress. We can hope, anyway.

To reach Sam Mellinger, call 816-234-4365, send email to smellinger@kcstar.com or follow him at Twitter.com/mellinger. For previous columns, go to KansasCity.com.

Special Feature
Sports year in review: 2020 was a year of unbridled joy and incomprehensible sorrow
740 views

Special Feature
What would sports look like with smaller or no crowds?
687 views

Special Feature
He made most of his gap years: Capehart, 85, gets degree from USC after starting in 1952
551 views