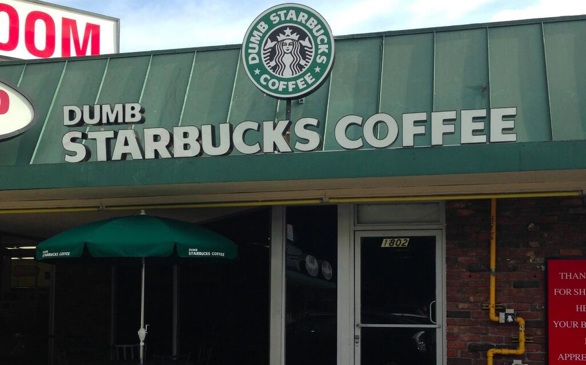 The parody shop has a full menu of coffee and cold drinks.
(Credit: Twitter: @dumbstarbucks)

It turns out Comedy Central was responsible for all the laughs and mystery behind the parody coffee shop, Dumb Starbucks.

According to the Los Angeles Times, comedian Nathan Fielder walked out of the shop Monday evening. Fielder has a show on Comedy Central called "Nathan for You," which tricks customers.

In a press conference outside the show, Fielder reportedly said, "Firstly, I’d like to thank our customers, neighbors and the community of Los Feliz for embracing my independent coffee shop with open arms...Obviously running a business is hard, especially a small business and we’ve encountered some major pushback."

Located at 1802 Hillhurst Ave. in Los Angeles is Dumb Starbucks, a self-proclaimed parody coffee shop that makes fun of Starbucks, according to USA Today.

At Dumb Starbucks, the menu is similar to Starbucks except there's a "dumb" attached before every word; you can get "dumb" drinks in different "dumb" sizes along with a "dumb" CD. For example, feel free to order a "dumb" venti "dumb" mocha frappucino and a "dumb" Nora Jones Duets album.

So, will Starbucks retaliate and argue Dumb Starbucks should not be using its trademark and logo? USA Today reports a Starbucks spokesperson wrote in an email to the Associated Press, "We are evaluating next steps and while we appreciate the humor, they cannot use our name, which is a protected trademark."

However, it seems that Dumb Starbucks is not too worried about any "dumb" lawsuits. The store claims it is allowed to use Starbucks' name and logo and make fun of it because it is "a work of parody art."

Do you think Dumb Starbucks is allowed to use the Starbucks name and logo? Leave your comments below!