Plenty at Stake When US, Canada Women Collide 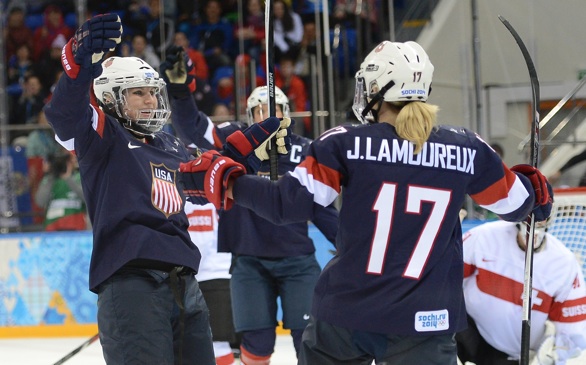 SOCHI, Russia — Julie Chu said she rarely gets tired of talking about the women’s hockey rivalry between the United States and Canada. And she never gets tired of playing the neighboring nation, which is why Chu and her teammates are so enamored with the new format for Olympic women’s hockey.

In Sochi, the top four teams are grouped in one pool, and the bottom four in another. That set up a U.S.-Canada showdown to conclude the preliminary round Wednesday. Both teams enter the game with 2-0 records and are guaranteed to move on to the semifinals.

Though it isn’t for the gold medal, there is plenty at stake, as there always is when the teams meet.

“This is a great rivalry that we need to keep sharing with people,’’ said Chu, a four-time Olympian and longtime veteran of the contentious series. “It helps push our sport to get better, and it definitely pushes our team to get better, knowing that Canada is such a great team. We love this rivalry.’’

Canada has floundered since a surprising coaching change on Dec. 12, losing its final four games against the U.S. on the teams’ pre-Olympic tour. Entering the Winter Games, it had gone 0-8 under new coach Kevin Dineen, a former NHL player and coach, and 1-11 in the 12 games since previous coach Dan Church resigned. The Canadians defeated Switzerland 5-0 in their Olympic opener to give Dineen his first international victory and scored three third-period goals for a 3-0 victory over Finland on Monday.

While Canada appears to be regaining its mojo, the Americans appear to be gaining steam. They defeated the Finns 3-1 and pounded the Swiss 9-0 earlier this week, wearing down both opponents with a tireless attack.

The top U.S. line of Amanda Kessel, Brianna Decker and Kendall Coyne combined for five goals and five assists in the game against Switzerland. Kessel and Decker lead the tournament in scoring with two goals and two assists each.

U.S. coach Katey Stone maintains that neither team has any secrets at this point. In recent weeks, she said, her group has become smarter in its defensive end and more prepared for Canada’s bruising style. The Canadians will have to deal with the Kessel-Decker-Coyne line, whose speed and teamwork shredded the Swiss on Monday.

“They’re young kids who play together well, who don’t feel the pressure, who use their speed, who talk to each other a lot,’’ Stone said. “There is a great dynamic between them.’’

Dineen likened his steep learning curve to “getting on a moving train.’’ He said he and his players have developed trust and confidence in one another in their short time together.

“This team plays for each other, and it is all ears,’’ said Dineen, who coached the Florida Panthers and played 18 NHL seasons. “They are very excited to see if I can bring some different thoughts and ideas that can help them have personal and team success.’’

Particularly against their rivals to the south. “I just thrive on games against the U.S.,’’ said Canada’s captain, Caroline Ouellette, who played for Minnesota Duluth. “It is emotional, and I want to play them as often as possible.’’