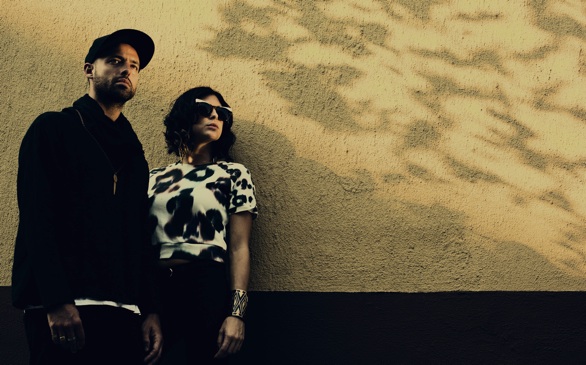 In a city as big as Los Angeles, selling out a show can often be seen as a major accomplishment for young, budding musicians. So when a band sells out one of its upcoming shows and quickly upgrades to a larger venue, it’s rare to see such a decision produce just as many ticket sales in a matter of days.

But that’s not the case for Phantogram, which has managed to do just that after it had originally been booked to play the Wiltern Theatre this month.

“We feel really grateful,” guitarist/producer Josh Carter said ahead of the band’s sold-out show on Feb. 22, which will now take place at the Hollywood Palladium, allowing for almost 2,000 more fans to attend.

The headlining performance will come just four days after the psych-pop duo releases its second full-length album Voices — this time on a major label (Universal Republic Records) — after working with famed record producer John Hill in the studio.

“This record is a lot bigger, more bombastic and heavy-hitting,” said Carter, who recruited keyboardist Nick Shelestak and drummer Chris Carhart last year to join Phantogram as touring members. “But it retains the same elements that we’ve always had as a band.”

Carter, after all, has been making music ever since he taught himself how to play drums at the age of 18. Since then, he’s managed to teach himself how to also play piano and guitar while learning how to make beats without the use of a drum kit. In the past two years, he’s had the chance to collaborate with such household names as Big Boi from Outkast (who he now calls a “mentor”) and The Flaming Lips.

Not bad for a guy who grew up wanting to be a professional skateboarder.

“I became obsessed with texture and sounds that you could create with electronics,” Carter explained to me about his eventual journey into music. “It’s just something I was really interested in and grew a passion for almost immediately.”

Yet, it wasn’t until Carter reconnected with his childhood friend Sarah Barthel that his music career would really take off.

It was there that he would find a suitable songwriting partner in Barthel, who had similarly returned home unsatisfied with her pursuit of a visual arts degree in New York City.

So, with Barthel (vocals, keyboards) at his side, Carter went to work, revamping a number of songs he had written several years earlier for their new project.

At that time, there was no Phantogram — just Charlie Everywhere.

“We got our first gig when we only had written two songs,” Carter recalled. “We needed a couple weeks to come up with a full set, and we needed a band name.”

Charlie Everywhere, however, didn’t last long before Carter and Barthel stumbled upon “Phantogram” and made it their own.

“I thought I had just made it up, some kind of message from an outer world,” Carter said of the name. “Then we looked it up, and we saw it was the perfect description for our music.”

On Voices, Phantogram’s sound doesn’t feel all that far from an outer world. Recorded at Edie Road Studio in Argyle, N.Y., the 11-track album continues to provide that unique “street beat” flavor that turned listeners on to “Mouthful of Diamonds” and “When I'm Small” off Eyelid Movies when they first hit the airwaves in 2009.

There’s even a song on Voices named after comedian Bill Murray. The duo, not surprisingly, are actually big fans of the award-winning actor.

“We think so visually that it just reminded us of Bill Murray in Rushmore, where he jumps into the pool and he’s sitting at the bottom,” Carter said about the song’s unorthodox title. “We believe very strongly in our artistic vision and what we’re doing.”

But with heavy doses of breakbeat and hints of trip-hop intertwining on singles like “Black Out Days” and “Fall in Love,” Barthel’s vocals have also taken on an expanded role on Voices — and that’s not necessarily a bad thing for Phantogram going forward.

“There’s no formula for what we do,” Carter said. “Everything just happens naturally.”

Phantogram will be performing at the Hollywood Palladium on Feb. 22, 2014.

Interviews
How a trans indie-rock star made the record of their life, with the help of some new housemates
1,108 views

Interviews
Boys will be Baby Boys in the latest spinoff album from Hippo Campus
1,051 views