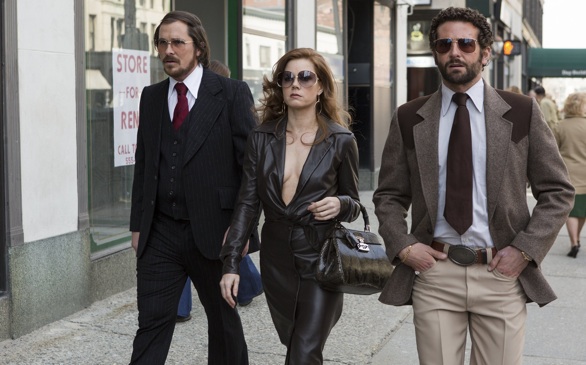 This figures to be a three horse race between American Hustle, Gravity and 12 Years a Slave. While Gravity was immensely popular, many might view it as more of a technical achievement, so expect it to sweep the technical categories. 12 Years a Slave is a highly respected “important” movie, but some of the movie’s brutal scenes might scare off some of the Academy’s more squeamish voters. That leaves us with American Hustle. It did win the Screen Actor’s Guild Award for Best Picture, though the SAG Awards aren’t as predictive of Oscar glory as some of the other guild awards. It’s also viewed as an “actor’s movie” as evidenced by its four nominations in each of the acting categories. With actors comprising the largest voting bloc, by far, of the Academy, expect them to throw their support behind David O. Russell’s latest.

In nine of the past 10 years, the DGA winner went on to win the Oscar. The one time that didn’t happen was last year when Ben Affleck won the DGA award and wasn’t even nominated for an Oscar. Cuarón won the DGA award this year, and I don’t see any reason to bet against him. Gravity was a critical favorite that also managed to be a commercial hit as well. And even jaded Hollywood types were wowed by the special effects.

Each year there are always a few sure things, and Blanchett picking up her second Oscar is one of them this year. She absolutely dominated the critics’ awards and won the all-important Screen Actors Guild Award. It looks like Blanchett better clear another space on her awards mantle. Something is nagging at me, however.

Since the academy introduced the supporting categories in 1936, only 15 films have been nominated in all four acting races, including American Hustle this year. Of the 14 previous films that contended in all four acting categories, a whopping 12 of them won at least one acting award. None of the four American Hustle acting nominees are the leading contenders in their respective categories, but history has shown that the odds of one of the four nominees from American Hustle pulling off the upset is pretty good. And as we all know, the Oscars are as much about politics as they are about the actual craft of filmmaking. This is Amy Adams’ fifth nomination, and she has yet to win. If she were older, she could pull off the upset as a lifetime achievement award winner similar to Al Pacino and Martin Scorsese. Blanchett is still a huge, huge favorite, but if there is a shocker in any of the acting categories this year, it could be Adams walking away as the upset winner.

The Academy loves when actors lose or gain weight for a role, and it also loves when actors play against type in a role. Matthew McConaughey did both this year as the former rom-com staple lost more than 40 pounds for this decidedly non rom-com film. I figured that Ejiofor would win the SAG award, but when McConaughey took home the SAG trophy, that pretty much locked up his Oscar trophy as well.

The Best Supporting Actress category has long favored ingénues, and Nyong’o certainly fits the bill. In her first major movie role, her trophy case is already pretty full from all the critics’ accolades she’s received, not to mention the all-important SAG Award. As I mentioned in the Best Actress category, and no offense to the guys from American Hustle, this is another category where there could be an American Hustle upset. Hollywood loves Jennifer Lawrence right now, and last year’s Best Actress winner is on a roll with headlining roles in two blockbuster franchises mixed in with her more character driven films. If she hadn’t won last year, I would pick her as the favorite in this category. In Oscar history, only five actors have managed the feat of winning back-to-back Oscars - Tom Hanks, Katharine Hepburn, Luise Rainer, Jason Robards and Spencer Tracy. That’s pretty heady company, and I’m not sure that Hollywood wants to add a 23-year-old to that list.

Leto has rightfully won almost every Supporting Actor award already this year for his total transformation into his role as the transgendered Rayon. It’s his to lose.

Captain Phillips won the Writers Guild Award, but the WGA awards aren’t as much of a predictor of Oscar success as the other guild awards. I’m guessing the Academy will stray from the WGA and award 12 Years a Slave. Except for Best Supporting Actress, it seems as if it will be shut out of the rest of the major categories. While the film was too brutal for some, it was deemed too important by many others to go home with so few trophies.

When theaters are showing sing-alongs to movies, a la Grease, Rocky Horror, etc., then you know a film has reached a high point in the cultural zeitgeist. With a sing-along version of Frozen already in theaters, not to mention the huge box office earnings, Frozen is certainly hot right now. With Pixar historically monopolizing this category, but being shut out this year, Frozen will (bad pun alert, again) ice out the competition.