Good Liars: May Be Wired Differently 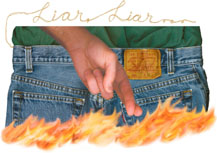 He lied to the courts, to his attorneys, to the news media, to the aunt and uncle who stood by him, to thousands of supporters who took up his cause.

He lied as he sat strapped in Virginia’s electric chair in 1992, proclaiming his innocence with such sincerity that his backers pressed on even after his death. His guilt was definitively proven only last week, through new DNA tests.

How could Coleman have lied so long and so well to so many?

The fact is, everybody lies sometimes. But some people step beyond the polite lies that color everyday discourse and into pathology.

The hard question is why that happens.

Young children are notorious liars – and that’s normal, psychologists say, given their difficulty distinguishing fact from thought, dream or desire. But most kids, as they grow older, go to school and interact with peers, come to learn the difference between truth and imagination, right and wrong. They develop the moral compass known as a conscience.

"The so-called pathological liar has learned from an early age that they get punished more often for telling the truth than they do for lying," says John Rooney, an emeritus professor of psychology at La Salle University. "They get so accustomed to devious behavior that they lie without much thought or emotion."

Recently, University of Southern California scientists offered a possible physical explanation, finding proof of brain abnormalities among people who habitually lie and cheat. Pathological liars had a surplus of white matter, the wiring that can provide tools for deceit, and a deficit of gray matter, which helps restrain the impulse to lie.

Our culture accepts a certain amount of deception – even demands it. If your wife asks you if she’s getting fat, there is but one correct reply. Answering in the affirmative doesn’t prove that you’re honest – it proves you’re a fool. But we have less tolerance for people who refuse to come clean when the evidence against them is overwhelming.

For years, Pete Rose maintained he never bet on baseball – and was banned from the game. Rosie Ruiz has become a punch line, still insisting she won the 1980 Boston Marathon, 26 years after she jumped into the race near its end. Korean stem-cell pioneer Hwang Woo-suk, his career in ruins, recently apologized for claiming to have cloned a human embryo.

But as much as we castigate people for lying, some of the blame lies with ourselves. A successful lie requires at least two parties, one to tell it and one to believe it. Studies show most of us aren’t very good at identifying liars. In fact, the people who think they’re good at it actually score lower.

Phillip Maltin, a Los Angeles lawyer who lectures on how to identify people who are lying, was once asked by a group of conspiracy buffs to examine the videotaped confession of James E. Files, an Illinois prison inmate who claims he shot John F. Kennedy.

"He is fantastic," Maltin says, with grudging admiration. "You look for all the indicia of dishonesty – change in tone, pitch, hesitation, change in body language, perspiration. This guy isn’t exhibiting this stuff."

Where Files trips up, Maltin says, is when the interviewer asks how much he was paid to kill Kennedy. At that moment, Files exhibits a cluster of behaviors not seen elsewhere on the tape. He shrugs slightly, alters his tone, halts in his speech.

"How would you forget how much you got paid to shoot the president of the United States," Maltin asks, "if you can remember the color of the gun, and the date, time and place you met with Lee Harvey Oswald?"

Maltin cites the research of University of California professor Paul Ekman, who conducted pioneering work in "microexpressions" – the small, involuntary facial movements that reveal true emotions. Most people never notice microexpressions in others. But to a trained observer, they represent the brain’s recognition of dishonesty, even as the mouth blabbers on.

You don’t detect dishonesty by looking for the lie, Maltin says, but by identifying the change in behavior that suggests a person is nervous in a situation where he or she shouldn’t be. But there’s a caveat.

"If somebody doesn’t believe what they’re saying is dishonest or deceptive, or if somebody delights in trying to deceive you, that person will not exhibit the characteristics," Maltin says. "You will never, for the most part, be able to identify a liar unless the person has a conscience."

Virginia legal specialist Marie Deans visited Roger Coleman in prison for nearly a decade, talked to him by phone practically every week.

She was with him the night he died and afterward helped to scatter his ashes in the Southwest Virginia mountains.

"My normal way of reacting to people telling me they were innocent was to say, `Right,’ and then ask the next question," Deans says. "But I didn’t with Roger. I paid very close attention."

In the early 1980s, when she met Coleman, Deans was waging a one-woman battle against Virginia’s death penalty, founding the Coalition on Jails and Prisons. She was no naif: She knew the ways of death row and the men who lived there. She also knew the anguish of the victims’ families – her mother-in-law had been murdered.

When the DNA results were announced this month, Deans says, she didn’t feel betrayed. Instead, she wondered: Is it lying if you honestly believe you’re telling the truth?

"Ever since DNA poked its head up, he was like, `I want one of those tests,’" she says. "If you’re guilty and you "know you’re guilty, you’re not going to be begging for forensic testing."

She long believed that Coleman suffered from neurological problems, that he had incurred some type of brain damage. He heard things, she says. Sometimes he would seclude himself in his cell, not speaking to anyone, for a week or more.

"I came to the conclusion that if Roger had committed this crime, he didn’t know it," Deans says. "I don’t believe that Roger was a scammer, or somebody who just decided he could lie his way out of this."

Of course, Coleman never claimed he had a brain injury. He said he was innocent. And in hindsight, one incident seems telling.

In his book about the case, May God Have Mercy, author John Tucker wrote that Coleman once hesitated at the prospect of DNA testing. Coleman maintained he had had sex with a female corrections officer, and that DNA from that encounter could be used to frame him.

At the time, his fears were dismissed as prison paranoia.

To some, the revelation of Coleman’s guilt was no revelation.

"Stop the presses: It turns out that rapists and killers are also liars," Michael Paranzino, president of a pro-death-penalty group called Throw Away the Key, tells the Associated Press.

To others it’s more complicated.

"The reason they’re able to lie so effectively is so few of us are good at detecting people who lie," says former U.S. military interrogator Greg Hartley.

A lie cannot exist in isolation. It requires the support of innumerable smaller lies, says Hartley, an Atlanta consultant and author of How to Spot a Liar.

He recalls an exercise where soldiers were being taught to resist interrogation. As the subjects were harassed, they’d try to protect their family by seeking to eliminate the line of questioning.

The key to decoding that fiction lay not just in the soldiers’ body language, but in the details of their story, Hartley says. What was the date of the accident? Where did it occur – not the town, the intersection? Was it a one-car crash or two?

Any "orphan" would remember those details.

Distributed by Knight Ridder/Tribune Information Services.
Article posted on 1/30/2006
This article has been viewed 2430 times.