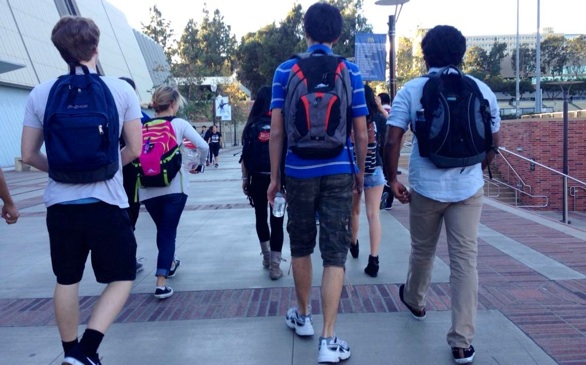 Officials at UCLA and USC say they are investigating fliers containing curses and racist language about Asian women dating white men that were mailed anonymously to both campuses.

UCLA Chancellor Gene Block has asked campus police to investigate the matter, according to a statement released Monday.

Block has expressed “his disgust and frustration” over the flier and pledged that the campus will “combat racism and bigotry so that the campus can be the welcoming, respectful environment our community deserves.”

The flier was sent recently to the Asian American Studies Center on the Westwood campus.

At USC, Mary Ho, director of Asian Pacific American Student Services, also said the matter is in the hands of the school’s public safety force. The flier was sent to her department.

In a letter on the department’s website, Ho said: “We will not tolerate such harmful, derogatory and racist slurs directed at the Asian Pacific American community or at any communities.”

About 50 students participated in a protest rally at UCLA on Monday, officials said. It was triggered by the flier but meant to focus awareness on what organizers say is a campus environment that perpetuates negative stereotypes about Asians and women, according to Uyen Hoang, a fourth-year student who is director of the Asian Pacific Coalition. A sign with similar language was posted in fall 2012 outside the UCLA Vietnamese Student Union office, she said.

A large number of student organizations at UCLA and other UC and Cal State campuses have signed a joint statement that said, in part: “To allow these attacks to remain unaddressed, whether they are intended to hurt or draw attention, is to tacitly endorse the marginalization of our community, to accept being painted as perpetual foreigners and to allow for the exotification and objectification of women of color.”