In Her Shoes: MoZella Takes Musical Steps With Will 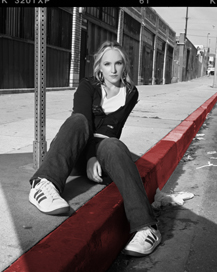 Untitled Document When 23-year-old singer-songwriter MoZella wanted to impress Maverick’s record executive, Guy Oseary, she did what any hopeful artist would have done to seal the deal. She put her best foot forward … literally.

"I had cool tennis shoes on. I’m serious. He’s [Oseary] a big Adidas fan and he wears a lot of Adidas and I wore cool Adidas sneakers and I don’t know, but I think that’s secretly why [he signed me]," says MoZella jokingly.

Her shoes may have left a good first impression, but it’s MoZella’s soulful, pitch-perfect voice and an upcoming debut album called, I Will that has been attracting a loyal fan base, comprised mostly of young teenage girls and earning her kudos from music insiders as the next Norah Jones.

Yet, there aren’t any real similarities between the two. MoZella, (a childhood nickname her father dubbed her) has a more decisively upbeat and pop-friendly tempo in contrast to the sultry jazz-like, smoky sounds of Jones. The Detroit native has also gotten comparisons to the likes of Fiona Apple, Macy Gray and Nelly Furtado – just don’t tell her she sounds like ‘90s folk singer Jewel.

Sure, they might both be blondes, L.A. transplants and on a first-name basis, but that’s where MoZella draws the line.

"I don’t like Jewel very much in the sense that I think she’s a very nice person but her vocal sound is not my vocal style," says MoZella.

Growing up to the sounds of all things pop like Madonna, Whitney Houston and even the once ubiquitous boy band, New Kids on the Block, MoZella says she first fell in love with music and God in the third grade. She was convinced that she wanted to be a nun, until she "discovered boys in the fourth grade."

By the age of 14, MoZella began taking a serious interest in music and took up guitar lessons and writing songs on her own. She became heavily influenced by bands that she felt she could relate to the most.

"I listened to a lot of Counting Crows, the Cranberries and Sheryl Crow … It was my first three real albums that I wore out," says MoZella.

The self-proclaimed "coffee house hippie" who was at times a bit "nutty-crunchy" in her long skirts and big sweaters decided to skip out on college after receiving her mother’s blessings, and made her big move to Los Angeles to pursue a career in music.

Not surprisingly, life was not easy for the young singer who left behind everything she had ever known. She moved in with two lesbians and learned Spanish working as a cake decorator and occasionally waited tables.

"If I had known how hard this was going to be or if I had more experience with life, I probably wouldn’t have taken the plunge so drastically. \But, I was 18 and so hopeful and excited about the opportunities and the possibilities that I just left," MoZella says.

But, resistance and persistence paid off with small rewards. She found her first manager at a coffee shop and landed gigs that caught the attention of various producers here and there, but nothing to launch her in the fast paced superstardom world of Kelly Clarkson.

"It wasn’t like, ‘Oh my God. This is it kid!’ … There was an obligatory round of false starts for sure … It was kind of getting me there but not really. But, when you look back, every little thing was a stepping stone to a greater accomplishment," says MoZella.

And when that next step comes along, you can be sure that she’ll be ready with the right pair of shoes again.

For more information, visit www.mozellamusic.com.
Article posted on 1/30/2006
This article has been viewed 2904 times.